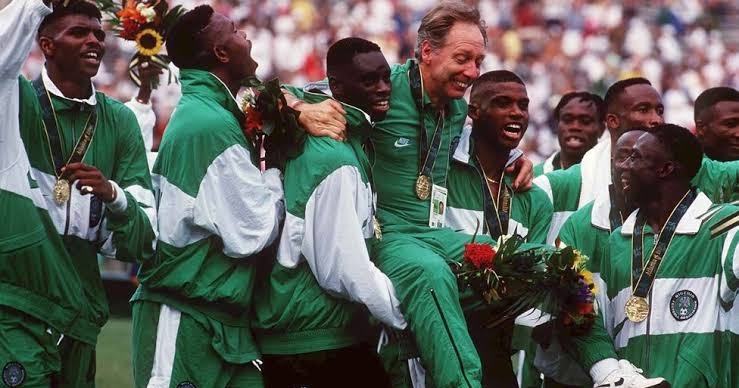 Mobi Oparaku in an exclusive interview with Completesports.com revealed that he deposited his 1996 Atlanta Olympic gold medal in a bank for safekeeping because he treasured it so much.

Nigeria entered the records book as the first African nation to win the men’s football event in the 1996 Olympic Games in Atlanta Georgia following a dramatic 3-2 win against Argentina in the epic final.

Oparaku, now Team Manager of Heartland, a Nigeria Professional Football League, NPFL, side said he did so for his kids and future generations, especially those who cared to have a feel of it.

Reflecting on the success of the U23 Olympic team otherwise tagged Dream Team 1 in the tournament, the Heartland Team Manager disclosed that given their level of preparation going into the tournament, their triumph did not come as a surprise.

Oparakui disclosed that after the famous 4-3 defeat of Brazil in the semi final via the golden goal scored by team captain, Nwankwo Kanu, they began to ‘smell’ the gold medal.

The Dream Team were up next against another South American and World football power, Argentina, in the final.

As would be expected, the triumphant Dream Team 1 players were handsomely rewarded by Nigeria and State governments as well as corporate bodies.

Oparaku added: “We were promised land and I got mine. We were promised that streets be named after us by our state governments in the state capital but that I didn’t get.

”But I personally paid for a street to be named after me in Owerri and that’s the street I’m living now.

SEE ALSO | List Of Super Eagles Players: All Names From Inception Till Date

”My gold medal? It is in the bank. I kept it in the bank because I treasure it so much. I want my children and even whoever that cares in the future to see it”.