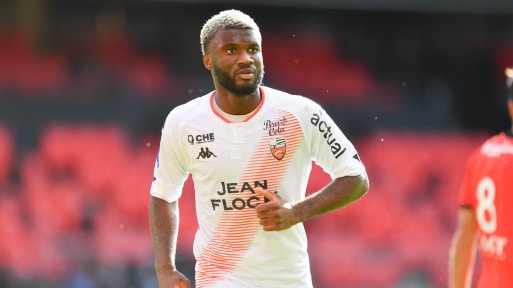 Super Eagles assistant coach, George Finidi, had asked forward Terem Moffi to take his chance ahead of Nigeria’s international friendly with Algeria in Oran next Tuesday.

The Lorient striker has hit top form this campaign in his Ligue 1, scoring six goals in eight league games and is expected to lead the Eagles’ attack in the absence of striking duo Victor Osimhen and Umar Sadiq.

In his last outing, Moffi scored in Lorient’s comfortable 3-1 win at Auxerre, which moved Régis Bris’ side into the third position before the international break.

On a personal note, only the duo of Paris Saint-Germain forwards Neymar (eight goals) and Kylian Mbappe (seven goals) have scored more than the Nigerian in the French top-flight.

“Moffi has to do what he has to do to make it into the starting team,” Finidi told PUNCH Sports Extra.

“Osimhen definitely, is the first choice once he’s back, he will take his place in the team but we have other players that are pushing him but Osimhen is always Osimhen.

“There are other players that have other qualities that can make up for his absence, so we will see how it goes.”

Moffi, who took part in the Eagles first training session in Constantine on Monday, is expected to lead the Eagles attack alongside Cyriel Dessers as the three times African champions chase their third successive victory under Jose Peseiro.

The 22-year-old will also be eager to add to his tally – two goals – for the Eagles in the friendly having made seven appearances since his debut against Cameroon in 2021.

Why Aribo was not called up explained

A fresh report has now revealed the reasons why Joe Aribo is missing from Nigeria’s squad for next week’s international friendly against Algeria in Oran.

On Saturday, a 22-man squad was released by the Nigeria Football Federation with the Southampton midfielder not listed.

It has now been confirmed that the midfielder asked to be excused from the game and it is also an opportunity to try out other new players.

“The coach (Jose Peseiro) wants to test some other players in the central midfield position and that’s why Raphael Onyedika was invited,” the official, who spoke on condition of anonymity, told PUNCH Sports Extra.

“Also, his (Aribo) exclusion is to help him settle in well at his new club though there are some personal issues he wants to sort out.”