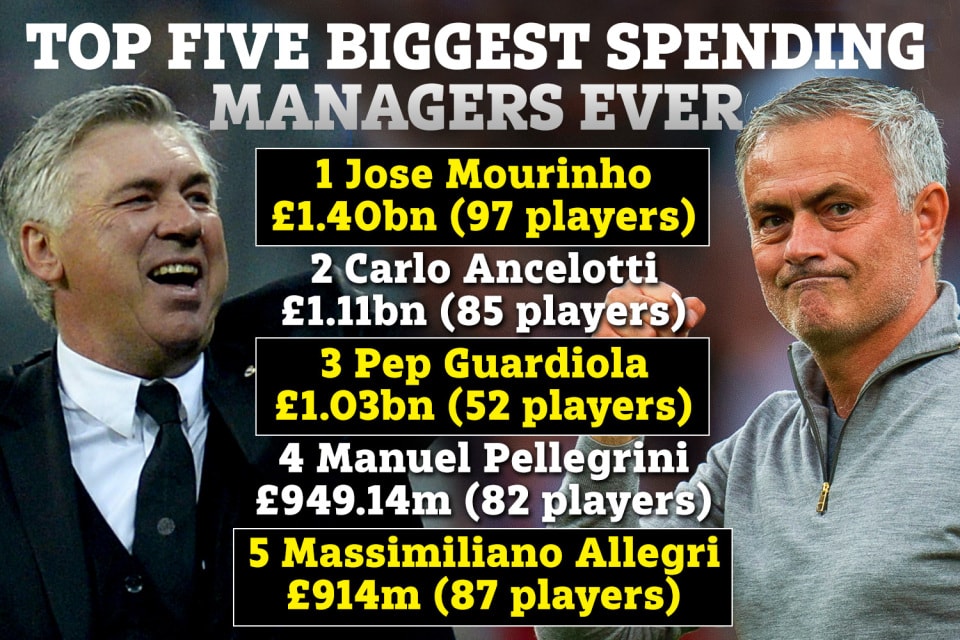 Jose Mourinho has spent more money on players than any other manager in history.

The Special One leads a trio of managers who have splashed more than a BILLION quid on the top talent.

Mourinho's fellow ex-Chelsea boss Carlo Ancelotti is second on the list with £1.11bn lavished on a total of 85 players.

And Man City boss Pep Guardiola comes third with £1.03bn spent on 52 players during his 11 years of management.

Below are the top spending managers:

The 52-year-old is out of job since leaving Juventus and was replaced by former Chelsea manager Maurizio Sarri.

But his 16 years in management has seen some huge sums of money switch hands, none more than the £98m he paid for Ronaldo last season.

Allegri also gave the thumbs up to signing Gonzalo Higuain for £75.3m in 2016 and current Man City star Joao Cancelo for around £40m in June 2018.

He also signed Kevin De Bruyne for Man City for a then club-record fee of £55m.

And in his current role as West Ham boss, he has brought in Sebastian Haller in a record deal of up to £45m and spent £33.5m on Felipe Anderson.

The 48-year-old has purchased the fewest amount of players in the top five but spent over £1bn doing it.

Guardiola's most expensive deal was this summer when City spent a club-record £62.5m on Rodri.

The Italian manager has splurged a whopping £1.11bn on some 85 players in a management career that started with Reggiana in 1995.

He has been in charge at AC Milan, Real Madrid, Chelsea, Bayern Munich and now Napoli.

The 56-year-old is currently out of job having been sacked by Manchester United last December.

His most expensive acquisition was £89million Paul Pogba – a world record at the time – ironically the player he fell out with at Old Trafford.