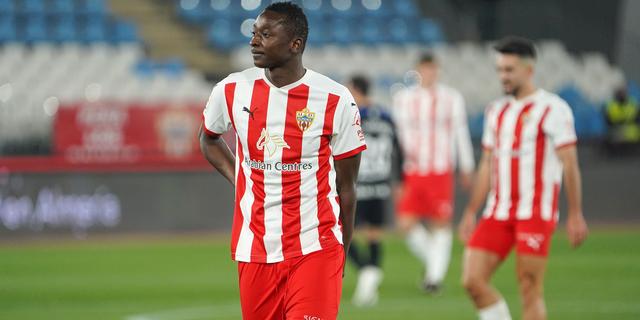 Newcastle has Almeria’s Nigerian star Umar Sadiq on their radar as they hope to bolster their attack.

Eddie Howe is keen to bring the forward to St-James Park in the January transfer window, with a fee of €25 million mooted.

Newcastle rebuild gets off the marks with the hiring of Eddie Howe as their new manager. The club still has its work cut out as they are still in relegation troubles.

Getting players of the calibre they dream of has been an uphill task as top-level players have no interest in getting embroiled in relegation skirmishes. As it is, it will take more than money for Newcastle to get going.

The club is not giving up the fight, as they are willing to throw some cash around. There would be quality players interested in making some extra bucks.

A player that has attracted the attention of the Saudi backed club is Nigerian star forward Umar Sadiq.

Fichajes reports that Umar Sadiq is generating some heat, as Newcastle United have joined the battle for his signature.

Newcastle United, who lie 19th on the log, have found goals at a premium, and that seems the first focus of Eddie Howe.

According to reports in Spain Eddie Howe is interested in Almeria's €25 million rated Umar Sadiq as he looks to improve his striking options #NUFC #NUFCFans pic.twitter.com/vL6pyLe6TM

The team has managed just 12 goals from 11 matches, and the new manager wants to bolster his options in attack. UD Almeria forward Umar Sadiq has thus emerged as an option that piques Howe’s interest.

Umar Sadiq, who joined Segunda Division side, UD Almeria on the 5th of October 2020, will not be opposed to a Premiership move. The Nigerian is on a five-year contract and will cost the Toons €25 million. Considering the prevailing market rates, it is not a steep figure and certainly not one to dent the oil-deep pockets of the Saudi backed side.

Almeria has shown a knack for unearthing talent and alongside Sadiq is Darwin Nunez, who SL Benfica signed for €25 million. Umar, like Darwin, has impressed, and the club will look to cash in on him.

The Kaduna born player had his first European stint at Spezia in 2014, where he spent time in the youth setup before a loan to Lavagnese. In 2015, he was again loaned to Roma, and then the deal was made permanent in 2016.

After signing a permanent deal with Roma, he went on a binge of loan spells at Bologna, Torino, NAC Breda, Rangers, Perugia and Partizan Belgrade.

At Partizan, he scored 23 goals in 52 appearances before Almeria snapped him up on a five-year contract for a fee of €5 million.

It has been a bargain for Almeria, with Sadiq making 58 appearances for the club and scoring 29 times with 13 assists. The Nigerian forward is still on fire, having banged in seven goals in 15 appearances this season.

Despite being in hot form, his goals were not enough to secure promotion for Almeria. The goals dried up in the promotion playoffs against Girona.