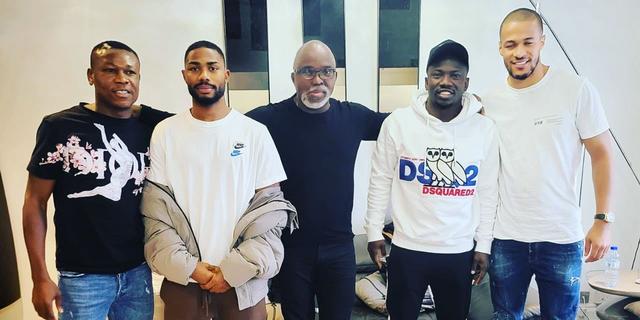 Watford forward Emmanuel Dennis met with officials of the Nigeria Football Federation in London this past week.

The Nigerian Football Federation have begun to make moves to secure the best players they can to boost Nigeria's chances of qualifying for the 2022 FIFA World Cup in Qatar this December.

Earlier in the month FIFA confirmed the finality of Ademola Lookman's switch to Nigeria. The Red Bull Salzburg forward, on loan at Leicester City, has been pushing for his Nigerian passport with the FIFA officials for a while and as a result missed out on being included in the Afcon 2021 squad of the Super Eagles.

With Lookman's switch now confirmed, the NFF have continued to reach out to players of interest in order to secure the best talent for the technical team of the Super Eagles to work with as they chase their spot in the FIFA World Cup later this year.

Watford striker Dennis was called up to represent Nigeria at the just-concluded African Cup of Nations tournament 2021 in Cameroon. However an issue with his club prevented the striker from travelling with the squad to Garoua where Nigeria's Super Eagles were camped for the duration of their stay in the tournament.

Dennis missing the afcon tournament meant that he has not represented Nigeria since November 2020 after he was asked from the squad by former manager Gernot Rohr.

The meeting with Dennis had in attendance the NFF president, Amaju Pinnick, Augustine Eguavoen, the Super Eagles interim coach and NFF technical director as well as some members of the NFF technical committee.

The rest of the Watford Nigerian contingent – William Troost-Ekong, Samuel Kalu and Peter Etebo – were also present at the meeting.

NFF president Pinnick described the meetings as a chance to “clear the air” and said he did not want Nigeria to simply be “making up the numbers” at the World Cup this winter.

He tweeted after the meeting: “In furtherance to my tweets regarding our plans to ensure we qualify for this year’s @FIFAWorldCup in Qatar, we’ve held a series of meetings in London with our Super Eagles players. It was me, the team secretary, the coach & technical adviser of the team.

“The Ministry of Youth & Sports Development, led by the Honourable Minister, @SundayDareSD also had a zoom meeting with over 30 players of the Super Eagles squad. Aside the chance to introduce the new members of the coaching crew to the team, it was also a chance to have “clear the air” talks. And I'm so proud of the committment [sic] and zeal I'm seeing and getting from the team. From players like Etebo, Kelechi, Troost & new lad, Lookman, the message was & is clear; we will play at the World Cup and give a good account of ourselves.

“We are not going to Qatar to make up the numbers. We are going to give it our best shot. I'd like to, again, thank the Honourable Minister, @SundayDareSD. It might sound like a broken record at this point, but his support is truly massive. From ensuring we get the MKO Abiola Stadium in Abuja, to joining in the zoom call with over 30 members of the National Team, his energy is truly infectious. Again. Make no mistake. World Cup qualification is non-negotiable. We are putting all of our efforts on getting the ticket.”