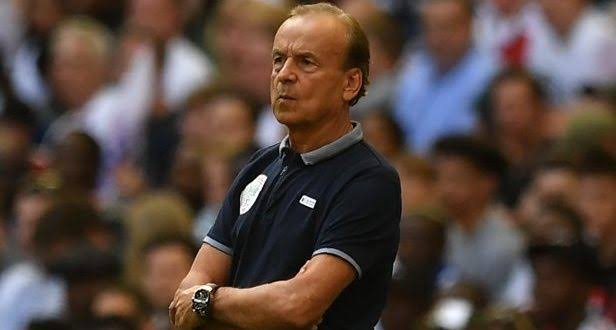 The NFF is working on relieving Gernot Rohr of his duties before the kick-off of AFCON.

The clock is ticking, and the Super Eagles are gearing up for the continents’ biggest tournament – The African Cup of Nations. The team is in mini disarray with rumours swirling over the future of the gaffer.

A few days ago, the coach sent a 40-man list to CAF. 28 players will make the final roster to fly the nation’s flag in Cameroon. The news did little to silence the rumours about Gernot Rohr’s future with the team.

With less than six weeks to go before the tournament commences, the Nigeria Football Federation (NFF) has to clear the air quickly and douse any news that does not paint the correct picture of the status of the manager and the team.

The Super Eagles, at this critical moment, do not need the shenanigans that have been going on. They need to focus on the work at hand as anything other than winning the African Cup of Nations should be considered a failure.

Gernot Rohr’s reign up in the air

The performance of the Super Eagles in the just concluded group stage of the World Cup qualifiers has called into question the tactical nous of its German tactician. The team put up displays that left much to be desired, with a large section of the fans demanding that the manager be relieved of his duties.

According to reports, sacking the German would cost the Nigeria Football Federation (NFF) a great deal as the federation would need to pay the manager a severance package. Recent reports, however, negates that news as the German is at the brink of losing his job.

The elephant in the room

It seems that all parties connected to the Super Eagles have agreed that Gernot Rohr’s position as team manager is no longer tenable. It seems a matter of when rather than if the manager would be relieved of his duties.

The snag over firing the German was the issue of paying a severance package. It hung around the NFF like a noose asphyxiating the federation, but as it turns out, there would be no need for the payout.

According to ESPN journalist Colin Udoh, the federation will only pay Rohr his salary for the remainder of his contract.

The manager’s contract with the Super Eagles expires at the end of 2022 after signing a two-year extension to his deal last year.

The NFF seeks ways to pay off the German before the African Cup of Nations kicks off.

Should the German be fired, the next assignment for the NFF is finding a new manager in time for the tournament. Jo Bonfrère has already thrown his hat in the ring.