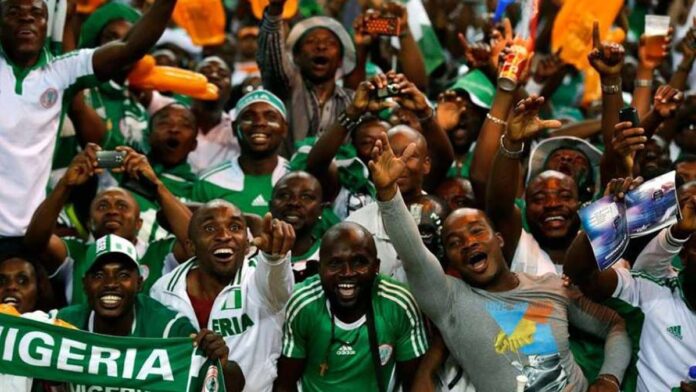 Nigerian fans have passionately appealed to the Super Eagles to defeat Ghana on Tuesday in Abuja and ensure Nigeria's representation at the FIFA 2022 World Cup in Qatar later this year.

Ghana and Nigeria are poised for the second leg of their doubleheader fixture which will see one of the West African giants miss out on the global showpiece.

A draw in the first leg at Kumasi, Ghana puts the tie in favour of Ghana, as CAF still applies the away goal rule to their games. This has led to calls from fans to the squad, led in the interim by Augustine Eguavoen, the technical director of the Nigerian Football Federation.

The 60,000 capacity Moshood Abiola Stadium is expected to be packed ahead of the tie, as the federal government also provided 20,000 free tickets for Nigerians to go and support the team against Ghana.

Speaking on the game yesterday, Eguavoen said his boys are not leaving the pitch as losers at the end of the night, promising the fans who have called for a grand performance the best Super Eagles they will see in a long time.

“I am not under any pressure. Yes, I am representing all Nigerian coaches and we want to be in Qatar. When we cross the line, everybody will jubilate,” the interim boss said.

Nigeria have not beaten Ghana in the last 13 games between both teams, and the 57 total matches between the two sides have ended in 25 wins for Ghana and only 12 for Nigeria.

A win on Tuesday will not only mean a ticket for the World Cup, but a changing of guard for Nigeria, who are considered one of Africa's best sides and one of the world's most promising sides of the last few years.

Moses Simon: Nigerians will see my form in Abuja

Moses Simon has become an important player in the national team setup but was kept quiet against Ghana in the first leg in Kumasi.

Simon is one of two players to have started every single 2022 World Cup qualifier game along with Napoli striker Victor Osimhen.

However, the Nantes left-winger was not his best against Ghana, to the chagrin of fans. Simon, who was on media duties alongside Eguavoen before the game, promised Nigerians that he was going to bring out his best self in the national team colours in the return leg.

“Of course you'll see me in form in tomorrow's game,” Moses said.

“It's not all about me, it's all about the team and team spirit. We know what it takes for this game and we'll give everything.”

Moses was also asked about his performance in the African Cup of Nations game against Tunisia which saw the end of the Super Eagles' amazing run in the tournament.

“The game against Tunisia I was not caged, if you say I was caged I didn't observe it and you talk about the game against Ghana it is tactics because we all know it can be difficult.

“We know how Ghana play so we decided to play for a draw because we know when they come here they will lose.”