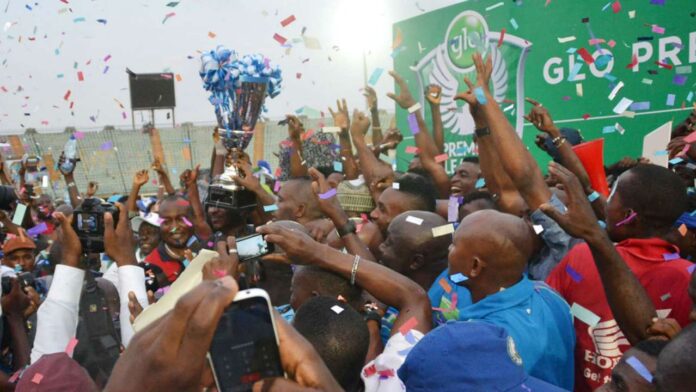 Did you know that the 2020/2021 Nigeria Professional Football League (NPFL) season will be the first time since 2017 prize money will be paid to Premier League winners and participating clubs?

The last champions to receive a Nigeria Premier League prize money of ₦50, 000, 000 was  Plateau United following their maiden league triumph under the tutelage of Kennedy Boboye in 2017.

A total of ₦200 million were shared by the 19 clubs in the league after Giwa FC were expelled for breaching competition rules and regulations.

2015 season champions Enyimba went home with 30 million Naira as prize money, while what the clubs earn has also increased with every season.

In the 2012/13 season, the total Nigeria Premier League prize money was ₦50 million, while the following season it rose to ₦75 million.

According to figures released by LMC, the champions received a minimum of ₦90 million in all direct payments for the 2016 season.

1) the Basic Award, which comprises the pool of funds shared equally among all the clubs;

2) the Merit Award paid to clubs on their final position on the table;

3) the football development and

4) the Bonus award which is based on performances including incentives for improving attendances, away wins/draws, fielding players under the age of 18 and hosting live matches.

The lowest placed team that season got up to ₦55 million from all payment centers.

But a truncated television rights deal with Super Sports in 2017 was what led to financial struggles at the LMC, with the league organizers failing to reward participating clubs and champions of the NPFL subsequently.

But now, there is a newly signed commercial and investment partnership between LMC and Redstrike Sports that promises to offer the NPFL sides financial benefits.

“There will be prize money (next season) the way we used to pay before. It’s not the first time we have paid prize monies,” Chairman of LMC, Mallam Shehu Dikko said in an interview on Kennis FM.

Upfront payments have already been made to the LMC by Redstrike, but what the Nigeria Premier League prize money will be for 20 clubs in the NPFL and the eventual champions will in the upcoming 2020/2021 campaign is unknown at this time.