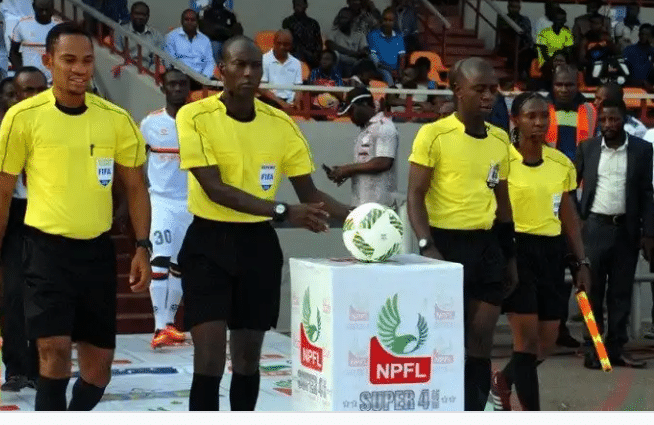 Gbenga Elegbeleye, chairman of the Interim Management Committee (IMC), says the remuneration of referees handling matches in the Nigeria Professional Football League (NPFL) has been increased by 50 percent to curb issues of poor officiating in the league.

Elegbeleye spoke with reporters in Abuja on Thursday.

The new NPFL season kicked off on January 8, with the first matchday churning out four away wins. The second round of games produced one win on the road and three draws by away teams.

The IMC chairman accredited the glut of positive results for away sides to the improved level of officiating in the league.

He added that IMC had improved the welfare package of the officials, saying, “these referees have no reason not to do well because to whom much is given, much is expected”.

“In the first week of the season, we had four away wins, and on the second match day, we also had one away win and three away draws. It shows the level of officiating and the sincerity of purpose in our officials,” Elegbeleye said.

“The home team's fans are now behaving themselves. In Edo, the away team was given a penalty in the 91st minute, and Remo Stars also scored their winning goal in Gombe in the 90th minute. So I commend our referees.

“One thing we have been doing to make the referees comfortable has been the increment of their emolument by 50 percent. We also increased their transport allowance by 40 percent. And all these fees will be paid a day before they officiate the games.

“We also pay for their accommodation and feeding also. So, these referees have no reason not to do well because to whom much is given, much is expected.”

After the opening two rounds of the season, newly-promoted Bendel Insurance alongside Remo Stars top Group A of the abridged league, while Niger Tornadoes and Abia Warriors lead the pack in Group B.