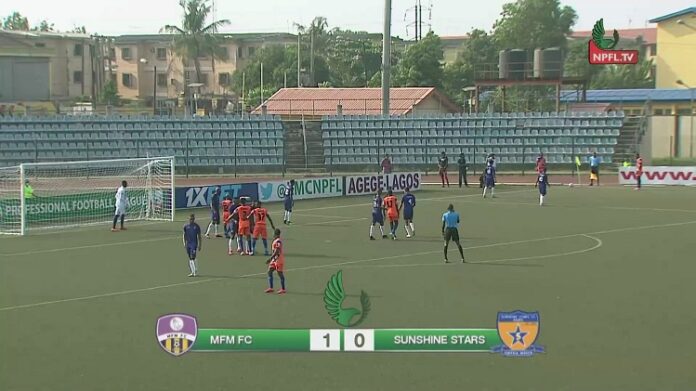 The League Management Company has finally decided to go digital with its content by birthing the NPFL.Tv App for Nigerian Professional Football League fixtures.

NPFL.TV was launched in December 2020.

It already has more than 10,000 downloads on Google’s Play Store with thousands mostly by Nigerians based abroad.

The NPFL.TV app has a silky smooth interface which guarantees a smooth transition between its different sections.

The Live section is reserved for live games.

It is important to note that the streaming app shows only one live game per match day, usually on Sundays.

Although, some users have raised eyebrows about this fact.

They say that if they must pay to watch live matches then they must have options to select from per game week.

He noted that there are plans to have as many games at a time in the future. But, for now, the app is basically in its testing stage mode.

He also noted that the app is free until certain details have been sorted after which ₦1,500 subscription fee will be required per month:

“Games are free for now. There are plans to have as many games as possible. Subscription isn’t tied to that for now. It is tied to what is going to be beamed,”– said Andy, an LMC staff.

He also noted that users do not need to worry about subscriptions until some time in the future. He didn’t say indicate when that will be though.

The only accepted means of payment, for now, is through a bank card. Other channels for subscription are in the works: other means of payment like PayPal and Google Pay.

You can catch up with other games by going to the Videos section to find full videos of other matches played on the same game day in the Catchup subsection or watch older matches in the Library subsection.

The Match section also shows you future match schedules in the Fixtures subsection, match results in the Results subsection, the NPFL table is available in the Tables subsection, and users can view pictures from recent games in the Photo Gallery subsection.

There is also a Teams section which shows a profile of the teams in the NPFL by their positions on the league table.

It also shows their overall performance and their current form.

This appears in the Clubs subsection while Players subsection shows the profile of players by ranking determined by their performance in the season so far.

The final section is the News section which basically brings every update as regards the league to your fingertips.

This includes match reports, club news, player reviews and others.

However, there is no Highlights section yet.

Hopefully, this is also one of the aspects the LMC is trying to fix on the NPFLtv app.

The replays were also few and far between, mostly used for goals.

Picture quality is great while the commentary was also crisp and clear.

The NPFL is one of the oldest football leagues in Africa established in 1972.

But the league began to suffer massive setback around the late 1990s and the early 2000s.

Estimatedly, Nigerians lose an estimate of over $200 million annually that could have been accrued from media rights paid to other countries for the local consumption of foreign league content, purchase of items like jerseys as well as endorsement by local brands.

One of the steps the LMC has taken in reversing its fortune is granting prospective audience ready access to NPFL games, results, table, live scores, all on the new NPFL.Tv App (https://www.npfl.tv/).