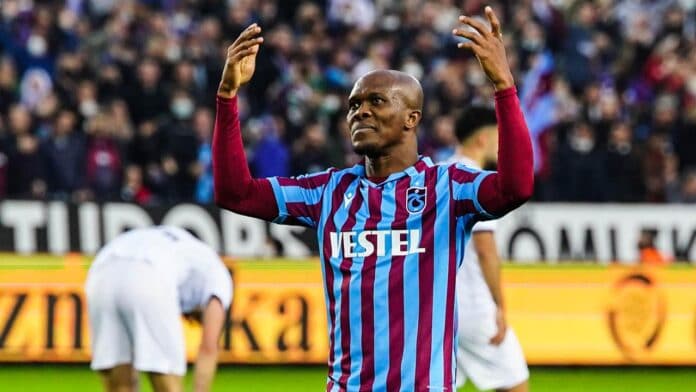 The Istanbul based club have been overshadowed by the biggest clubs in the city for decades. It was a hard fought battle to get back to the top and Nwakaeme was a big part of their run to their first league title since 1984.

The 33-year-old Nigerian forward was left on the bench after only just returning from an injury last week and watched his side play out an entertaining 2-2 draw against Antalyaspor in front of their home fans.

The Black Sea Storm opened the scoring in the third minute thanks to a goal from Danish striker Andreas Cornelius. Antalyaspor equalised through Alasanne Ndao six minutes into the second half but less than ten minutes later, the hosts were 2-1 up thanks to a goal from Dorukhan Tokoz. They were already in a celebratory mood until Haji Wright pulled one back for the visitors. A win or a draw was needed to clinch the title at the end of the day, so the hosts sat up and defended to achieve their aim.

The Super Lig has three games to go and Trabzonspor fans will be celebrating for a long time after almost four decades of being denied the opportunity. Nwakaeme's contribution to their upsurge will not be forgotten in a hurry, as his 11 goals and 10 assists provided a huge boost for the club.

This season's tally is better than his seven goals and seven assists from last season. His statue in Trabzon also signifies the legacy he will be leaving in the hearts of those at the club when he finally calls time on his career in the small Istanbul club.

That time may be soon, however, as the Nigerian may not be at the club next season to enjoy the thrill of defending the title with a deal already reportedly agreed to play for Fenerbahce next season.

Another striker doing big things in Europe is Victor Osimhen, who on Saturday, equalled his best scoring season in Europe with his goal for Napoli in their 6-1 rout of Sassuolo.

Napoli were winless in four games which tanked their chances of a first Scudetto since 1990. They are now battling for third place, albeit with a little hope that AC Milan and Internazionale slip up in the remaining games of the season to give them a chance to reclaim the top spot.

Napoli were an inspired side on the afternoon, beginning their rout in the seventh minute with a goal from star defender Kalidou Koulibaly. Osimhen rose highest to power home a header for Napoli's second in the 15th minute to notch his 13th league goal of the season.

That was the second time he had scored that many in Europe, the first being in his solitary season at LOSC Lille. Like in that season in France, Osimhen also notched his fifth league assist as his pass to Hirving Lozano four minutes after his goal led to Napoli's third.

It also puts him as the best performing Nigerian player in the top five leagues, and the second best in Europe behind Turkish champion Nwakaeme. With four games to go in the Serie A, the 23-year-old could surpass his personal best and give suitors more reasons to come after him in the summer.

Osimhen has been linked with a move to the Premier League and Napoli are reported to be ready to listen to offers of €100 million and above for the menacing striker.