Andre Gomes has completed his £22 million move to Everton, the Premier League club announced on Tuesday.

Gomes signed a five-year deal with the Premier League club that will run till the summer of 2024.

With his position at the club being doubtful, there were talks of a permanent move last summer before he made a deadline day season-long loan move to Everton.

Everton remained ahead to secure his services, with news last week hinting they were set to sign him in a £22 million deal. 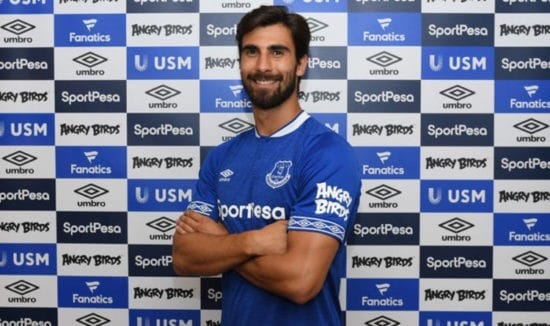 That has surely turned out to be the case, with the Portuguese international officially joining the Merseyside club from Barca.

The deal also entails add-ons in addition to the base fee of £22 million, according to the official announcement by Barcelona.

The Portuguese international, meanwhile, showed his happiness at joining Everton on a permanent basis.

“I know the club made a massive effort to sign me and I’m very happy and thankful to them. I said during the year that I felt part of a family and that is the most important thing to me. Last year was a really good experience for me.”

“I just wanted to feel part of something special and I found it here. It was good for me at that moment and right now, after signing for Everton, it’s even better. I think the ambition here is not only for me, I think it’s for all the players, the fans and the Club. We are all excited about that.

Only time will tell if the £22 million bears fruit or not.