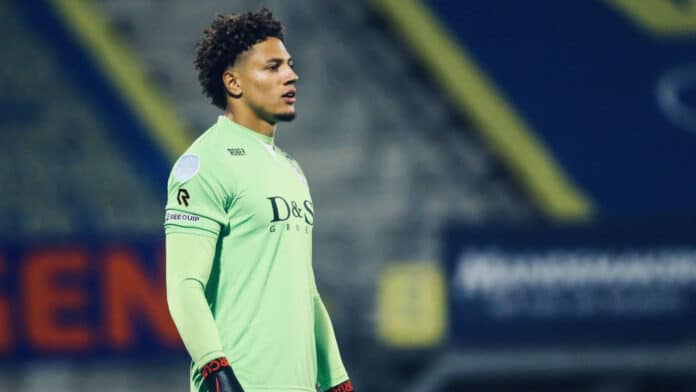 The veteran English goalkeeper announced that he will be leaving the Hornets' nest at the end of the season. The 39-year-old former Manchester United goalkeeper tweeted: “The ups, downs, good, bad and ugly…it’s all part of the journey!

“My time at Watford FC is up, but a huge thanks for all the support and love I've received from fans, players and staff in the 6 years with the club, it’s been a blast!

“Looking forward to what next season will bring.”

This leaves the number one spot at the club up for taking, with Okoye returning to his parent club in the coming weeks to prepare for a new season in the English Championship.

The German-born Nigerian international's heroics between the sticks for Eredivisie club Sparta Rotterdam, where he spent one-and-a-half seasons and a six month loan spell, helped keep the club afloat.

The relegation race went down to the wire and it took some special performances from Okoye and a few other members of the team to assure them of a spot in the Dutch top flight next season.

In the penultimate game of the season, Okoye proved roo6big for Sparta's opponents PEC Zwolle in goal, saving a number of efforts. His teammates did their bit in attack, putting two past their opponents to leave the relegation zone and move up into 15th place.

This is the second season in a row that Okoye has come up clutch for the club, after his heroics in the 2020/21 season also helped them play in the 2021/22 Eredivisie season.

An impassioned Okoye took the microphone and rallied the supporters after the game which was their last home game of the season. He will now join up with his new teammates in England where his chances of making it to the top have been boosted by Foster's departure.

Meanwhile, Okoye will be squaring off against his international teammate Semilore Ajayi who signed a three-year extension at the Hawthorns on Monday.

Semi Ajayi has been at West Bromwich Albion since 2019 and has grown into a key figure at the club. Steve Bruce described his as the club's best player since he joined the club in February and expressed his delight that the defender was signing an extension.

“I’m absolutely delighted Semi has committed his future to us,” the former Newcastle manager said. “He’s arguably been our best player since I arrived at the club back in February, and I believe he has all the attributes needed to be a Premier League defender

“This signing is key for us in terms of what we want to do next season and the rebuild which needs to happen. Semi is a crucial player in our team and I’m delighted he’s extended his stay.”

Ajayi also expressed his delight at signing a new deal with the club. “I’m really, really pleased to secure my future here at this football club,” he said. “I’ve thoroughly enjoyed my time here, through the highs and the lows, and I’m excited about the future.

“The talks have been going on for a very long time so I’m glad we’ve finally got it all sorted. I can now look forward to next season and doing my best to try and help this club get back to the Premier League.”

He will now be facing off with Okoye's team for a spot in the 2023/24 Premier League season.