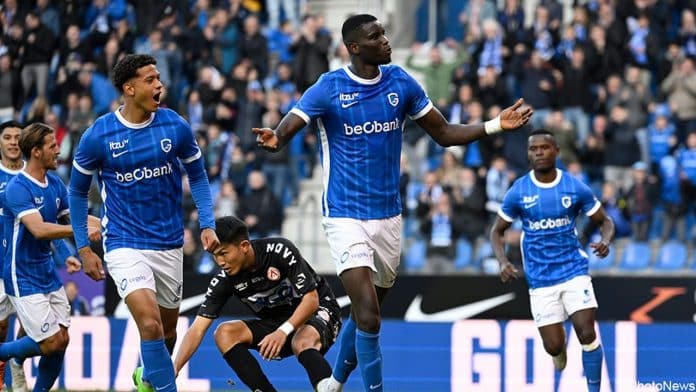 Super Eagles striker Paul Onuachu has shared his thoughts on why Genk found it difficult to beat visiting Kortrijk easily at the Cegeka Arena on Saturday.

Genk hosted Kortrijk on matchday eleven of the Belgian First Division A and laboured to a 2-1 win in front of the home fans. Onuachu, who opened his goal account last weekend, grabbed both goals to lead his side to a second successive win.

In the opening half, the Smurfs were the better team but missed several good chances. Onuachu was on hand to score the opening goal for the hosts just eight minutes before the break, heading home from a Trésor freekick. The 1-0 scoreline, though, was flattering for Kortrijk, who should have conceded more.

“If we had gone into the locker room with 2-0 or 3-0, the job would have been done,” Onuachu told the media after the encounter.

“But in the end, we even needed a free kick to take the lead. A weapon, we train a lot on it. But we definitely should have scored a field goal. Now we kept the opponent in the match.”

The second half was much more difficult for Genk as Kortrijk grew in confidence. Having stunned league leaders Antwerp 2-1 last week on home soil, they were up and running in the after the break.

Shortly after the interval, Selemani grabbed the equaliser for the Adnan Custovic-managed side. But Onuachu was on hand to convert from the penalty spot in the 79th minute to secure all three points and a ninth win of the season for Genk.

“But this Kortrijk was won against Antwerp a week ago. Then you know this isn’t a bad team.

“Well, we didn’t panic easily. So we kept pushing and eventually, we were rewarded. You saw after the input of Nemeth and Samatta that new energy was released.

“The fact that I could score a second time, albeit from the penalty spot, is a bonus. I feel better week after week in this system. We will continue to cling to Antwerp. On to the next assignment.”

With the win, Genk stayed second on the Belgian FDA table, two points behind Antwerp.

Wouter Vrancken’s men will trade tackles with OH Leuven and Westerlo before setting up a mouth-watering clash against high-flying Antwerp on October 23.