Ousmane Dembele is set for yet another spell on the sidelines as he suffered a fresh injury setback on his comeback after a four-month layoff. The Frenchman was brought on as a second-half substitute for the final 25 minutes of Barcelona’s narrow 1-0 Champions League victory away at Ukrainian outfit Dynamo Kiev on Tuesday where he suffered a ‘strain in the semimembranosus muscle of his left hamstring’ as revealed in a statement on the club’s official website on Thursday morning.

“Dembele has a strain in the semimembranosus muscle of his left hamstring,” Barca said. “He is unavailable for selection and his recovery will dictate his return.”

The 24-year-old is not expected to play any part in his side’s clash versus Celta Vigo at Estadio de Balaidos this weekend but there is no timetable yet regarding his return to action. However, with the last international break of the year on the horizon, the winger could be back in time for the subsequent league outing which happens to be the Catalan derby versus city rivals Espanyol on November 20.

Dembele’s injury problems looked to have been over as he featured in 30 La Liga matches for the first time during the 2020-21 campaign, scoring six times and supplying three assists in that time, before heading off to represent the France national team at Euro 2020 where he suffered a premature end to his tournament due to a knee injury he picked up in the second group-stage match versus Hungary. 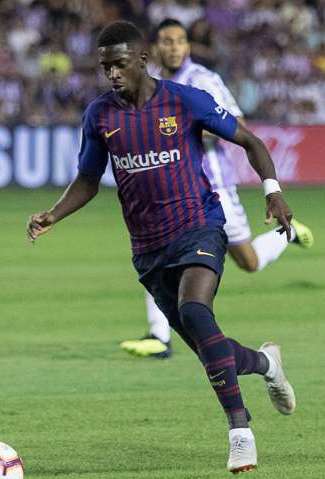 Since moving to Spain from Germany, Dembele has been injured on 13 different occasions and undergone three surgeries, missing a grand total of 98 games – including 14 this season – and has failed to live up to the high expectations that Barcelona had when they forked out a hefty €105m for him back in 2017 after the departure of Neymar for a world-record €222m fee.

The ex-Dortmund man is now in the final eight months of his five-year contract and his persistent injury woes could see his time at the Camp Nou come to an end whether in the January transfer window or the next summer as he is reportedly wanted by Newcastle United following the recent Saudi Arabia-led takeover at St James’ Park.

He becomes the latest attacker on the club’s treatment table, joining the likes of Sergio Aguero(Heart Problem) and Martin Braithwaite(Knee) as the Blaugrana’s injury woes continue to pile up in what has been an underwhelming campaign to date. The 26-time La Liga champions currently sit ninth on the log, a whopping nine points behind current leaders Real Sociedad off the back of their worst start to a domestic season since the 1987-88 campaign.

In the absence of the aforementioned trio, all eyes will be on newly-signed Memphis Depay as well as the fit-again Ansu Fati who has been handed the huge responsibility of donning the number 10 jersey following the departure of Lionel Messi last summer and also netted the crucial winner last time out with his third goal of the season in just over 300 minutes of action so far.