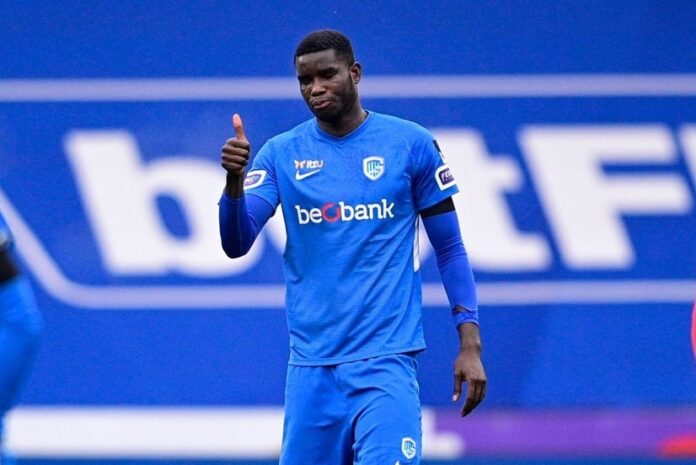 Augustine Eguavoen will be without Paul Onuachu after suffering a hamstring injury on Sunday.
The gangling striker scored in the 1-1 draw between his side Genk and Royal Antwerp before leaving the pitch in the 71st minute.

The Africa Cup of Nations will go on after much pressure from Europe to postpone the tournament. The Confederation of African Football (CAF) ruled Monday that the competition would go on as planned. CAF announcement came after the English FA pledged to continue with matches of the Premier League in the face of the upsurge in the Omicron variant of COVID-19.

Participating countries can now continue their plans for the tournament set to start in a few weeks. With matches in Europe (especially England) still ongoing, coaches will be worried about injuries to the players ahead of the competition.

Most countries have set camping for their teams after Christmas. It means clubs will start losing their players to the competition in about a week. Liverpool manager Jurgen Klopp had hoped for an AFCON postponement, as he will lose three of his key players to the competition. Sadio Mane (Senegal), Mohamed Salah (Egypt) and Naby Keita (Guinea) will all be representing their various countries at AFCON.

While Nigeria is rejoicing over the imminent return to action of Victor Osimhen, the Super Eagles have received another blow. Another AFCON bound striker has been knocked out of the tournament by injury.

Onuachu out of AFCON

With barely three weeks to the commencement of the Africa Cup of Nations, Nigeria received another injury blow. Augustine Eguavoen will have to tinker with his team list and strategies as he will be without another player at the tournament.

Paul Onuachu added to the worries of coach Augustine Eguavoen after he picked up an injury in the 1-1 draw between Genk and Royal Antwerp on Sunday. The gangling striker could not finish the game against Royal Antwerp after being aided off the pitch in the 71st minute following a hamstring injury. The Nigerian forward had registered his 12th goal this season, following his goal in the 32nd minute for Genk.

Onuachu should be out of commission for at least three weeks, which all but rules him out of AFCON starting on January 9.

The injury comes as a big blow to Eguavoen’s plans for the competition.

Effects of the injury on the Super Eagles

Nature has been toying with the Super Eagles as the team has suffered injuries to key players. Oghenekaro Etebo and Kingsley Michael are two players who will miss the tournament due to injury, while Victor Osimhen is in a race against time to be fit for the competition.

Onuachu was to fill in for Victor Osimhen should he fail to recover on time. The news of his injury tears to shreds Eguavoen’s plans.

It is not all gloom and doom for the Super Eagles coach Augustine Eguavoen as there are other strikers he can call upon to fill the role. Ahmed Musa, Emmanuel Dennis and Kelechi Iheanacho can do a good job, while Taiwo Awoniyi is in good form with Union Berlin.

Nigeria plays the Pharaohs of Egypt in their first AFCON game on January 11.