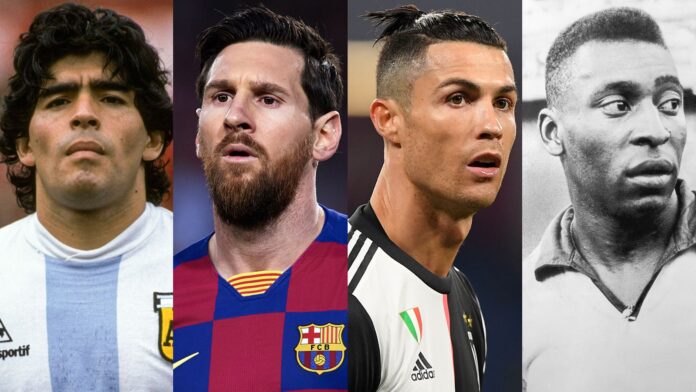 Pele and Maradona are good examples of what football mastery entails as much as the like of Lionel Messi and Cristiano Ronaldo has done as well.

It is widely notable as to why they are regarded as football great owing to their record both at the club and on an international level.

Brazil’s Pele and the late Diego Maradona became iconic figures after their exploits at the World Cup with the former aiding Brazil’s World Cup success in the 1950s.

While Maradona exquisite goal at Mexico 86 became a landmark in the history of the game.

Though Maradona has been largely compared with his compatriot Lionel Messi, the former Barcelona man is still short of glory at the World Cup despite reaching the 2014 final and losing to eventual champions Germany.

The Native Argentines could argue that Angel Di-Maria's injury that led to his absence from the World Cup final was one of the reasons for their loss.

While star forward Carlos Tevez was left out of the World Cup squad for reasons best known to the Argentine national Team Coach as at then.

It may have afforded Messi the opportunity to win possibly in the final against Germany had the 2 aforementioned players play a part in that match.

Maybe Messi would have been a World Cup winner by now like his PSG teammate Kylian Mbappe achieved with France not minding his young age.

The exploits of Pele and Maradona may have been compared to the Ronald-Messi era. But with the former winning the World Cup they still stand tall in this regard.

Despite the not-so-good TV coverage when Pele and Maradona were playing they were able to capture the heart of the fans.

Pele’s renowned record of scoring over 1000 goals says a lot in the mix as much as Maradona’s individual (solo) goal at Mexico 86 World Cup.

Messi has done something similar to that with his solo goal against Getafe akin to Maradona’s goal.

Ronaldo may have inspired series of  (UEFA) Champions League triumphs during his time at Real Madrid but there is no hiding the fact that he’s been aided also by the European media.

Messi has enjoyed the elevation of the press as the success story of stars like Wesley Sneijder, Arjen Robben, was undermined to a fault.

Ronaldo’s exploits at Manchester United initially was a very magnificent one even now not minding their 0-1 loss to Aston Villa.

But Pele’s art with the ball and how he rose up the rank as a 17-year-old place him above the quorum alongside the legendary Diego.

The Argentine's “hand of God” handball goal has raised very much eyebrows but during their time the headlines they made were largely due to their (match) performances on the pitch.

Unlike the media system which has popularized the likes of Cristiano Ronaldo and Lionel Messi for the past decade.

All said and done, Diego has gone to rest (R.I.P) at 60 while Pele leaves on despite some of his (medical) health Issues.

But there is no hiding the fact at Ronaldo and Messi had media assistance to their rising especially the former who is very much publicized by the European press to suffix his matching Lionel Messi in the number of Ballon D’or titles he’s worn as a player.