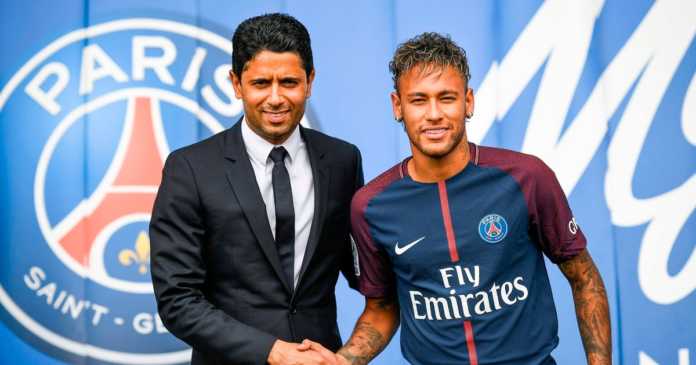 PSG president Nasser al-Khelaifi has taken a swipe at Real Madrid over what he termed ‘behind the scenes' chase of Neymar.

The Bernabeu club have been long-term suitors of Neymar and Madrid-based news outlets with close ties to the club have continually made claims of a move from Paris being in the works.

But al-Khelaifi, speaking at the launch of PSG's partnership with Michael Jordan's Nike brand, told Marca in no vague terms that is time for Madrid's back-alley pursuit of the Brazilian forward to stop.

“To be a realist it's a bit frustrating because it isn't fair that other clubs or someone talks to our players,” he said.

“We don't like it at all and we've talked about it at the time with Real Madrid.

“We have a good relationship and they say they respect PSG, I hope that is true.

“We respect Real Madrid and their president, Florentino Perez, but I believe that it's important for everyone that we don't work behind the scenes… I don't know if you catch my drift.

“If there is something, it is better that we talk, talk with Florentino Perez or with whoever and we say what we like and what we don't like.

“It is what we expect from all clubs, not just Real Madrid. To kill each other is not how PSG works and I hope that other clubs won't do the same to us.”

The Madrid media has long published a story that PSG would come under scrutiny from UEFA over their spending, compelling them to release their star man into the welcoming arms of Real president Florentino Perez.

And the PSG chief was under no delusions as to where such reports were emanating as he accused leading clubs of spitefully spreading lies about PSG.

But al-Khelaifi saved his strongest words for La Liga president Javier Tebas, a long-time critic of the Parisians' spending.

Tebas mentioned in August that PSG are “a group using every loophole just like Manchester City” and that they “destabilize the transfer market.”

“You need to ask why state-owned clubs exist as they are inflating the market when they buy players,” he said.

But here’s how al-Khelaifi's responded: “I've never talked about Tebas behind his back and he does that to us. The last time that we spoke I was very clear with him. It is best to say things to people's faces.

“He attacks everyone, Juve, Inter, PSG. He should focus on his own business, on La Liga and its clubs, and let the rest of us get on with our jobs.