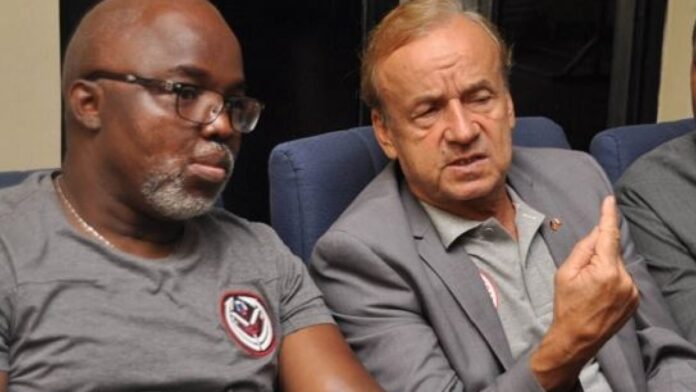 Gernot Rohr has hit out at Amaju Pinnick over his claims that the Super Eagles under him were a step away from disaster.

Speaking on a televised interview, Amaju Pinnick claimed the federation had to act because of indiscipline in the team.

The lacklustre displays of the Super Eagles led to the calls for the dismissal of Gernot Rohr. After several weeks of clamour (which many believe was because of the NFF’s inability to pay off Gernot Rohr), the German manager was finally relieved of his duties.

The Nigeria Football Federation believes that indiscipline in the squad rather than cries by Nigerians to let the German go forced their hand.

Last Sunday, the Nigeria Football Federation announced the dismissal of the Super Eagles coach Gernot Rohr. The German had a contract billed to expire in December 2022. The NFF did not reveal much in the announcement. After Rohr’s dismissal, the federation boss Amaju Pinnick granted a television interview relayed by the Cable, where he posited that the Super Eagles were not far from a disaster.

According to Pinnick, the loss of discipline in the Super Eagles dressing room was the sole reason for the dismissal of Gernot Rohr. Pinnick said that once there is indiscipline, the team loses its foundation and the Super Eagles were at its lowest ebb with the Super Eagles. He claims that was why they had to act.

Pinnick further elucidated on the issue. He claimed that players would eventually turn on the team. They will believe they are indispensable.

Gernot Rohr is having none of Pinnick’s postulations, and he has called it out for what he believes it is. The unimpressed German is shocked at the statements made by the football federation boss Amaju Pinnick.

He describes the reasons posited by Pinnick for his dismissal as utter nonsense and wants to set the records straight. Rohr says that Amaju Pinnick was incorrect with his statements concerning squad discipline and team management. He says it is utter bunkum for Pinnick to cite team discipline and poor management as reasons behind his dismissal.

Rohr claims that the dressing room and coaching crew was behind him. He also said he had their trust and support.

But Rohr is not impressed by Pinnick’s statement, with the former Girondins Bordeaux manager maintaining that he had the total support of Super Eagles players and coaching crew.

Goodwill messages and a Pinnick attack

Gernot Rohr believes he did a decent job as coach of the Super Eagles. The 68-year-old German points to the heart-warming messages he received from the players as a sign his work was appreciated.

Watford bound goalkeeper Maduka Okoye and Napoli striker Victor Osimhen are among the players that showed their appreciation to the coach through ‘Thank you’ messages.

Rohr also hit a broadside shot at Pinnick. He claims that his sack was premeditated. He points to Augustine Eguavoen's appointment a year ago as Technical Director as the premise for basing his accusations.

Speaking with Colin Udoh, Rohr said that Pinnick’s claims were ridiculous, but he still thanked the federation boss and wished the team well.