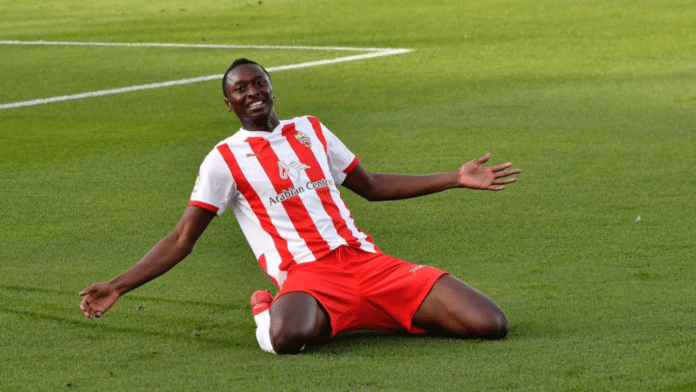 Two of Nigeria's striker options ahead of the all important clash against Ghana for a spot in the 2022 FIFA World Cup finals have made a huge statement in their clubs in the most recent European match week.

UD Almeria's Sadiq Umar was front and centre for his club, who currently sit at the top of the LaLiga Segunda Division, as they beat Fuenlabrada 3-1 on Friday.

Umar scored and assisted in the game to become the first Almeria player ever to score in four consecutive league games for the club.

The big Nigerian forward won the ball back from opposition defenders and chipped in an exquisite lob for his teammate Arnau Puigmal to smash home for Almeria's opener.

Then he capitalised on his big frame to rise highest and power home a header in the 66th minute to put his club 2-1 up after they conceded an equaliser following slack defending just a few minutes after their opener.

In Germany, Taiwo Awoniyi came off the bench to pull Union Berlin back into the game after they began to slack following their opening goal, to help them secure a 3-1 victory over Mainz to end a losing streak.

Taiwo had been stuck on nine Bundesliga goals since December 4 and after the African Cup of Nations in Cameroon, had struggled to get back into the groove of things.

He was left out of the starting lineup for the Mainz game but came on in the 67th minute. Eight minutes later, his name was on the score sheet for his 10th Bundesliga goap of the season and his first league goal of 2022.

It was his third goal against his former club Mainz, against whom he also bagged his only professional career brace in the reverse fixture back in October.

The 25-year-old former AS Roma man has been in top form for Almeria, leading their Segunda Division title charge as they prepare for life in the first division.

2022 has been a great year for him too, as he made his international debut for Nigeria at the Afcon, also scoring his first goal.

Since returning to Spain in late January, Umar has scored five goals in his last four appearances for Almeria and is the Segunda Division's most in-form striker at the moment.

The goal against Fuenlabrada is his 36th in all competitions for the club this season, which has pushed him into the top ten highest league goalscorers for Almeria.

The 25-year-old has been in top form since his return from the 2021 Africa Cup of Nations, finding the back of the net against Ibiza, Malaga, and Mirandes (twice), before his second-half strike versus Fuenlabrada.

Umar still has 14 rounds to go to get into the top five and could become an all-time Almeria great by the time they achieve promotion to LaLiga.