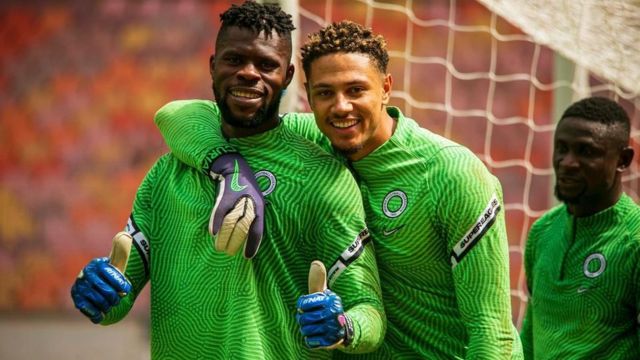 Ike Shorunmu, a former Nigerian national team goalkeeper, has claimed that the solution to the Super Eagles' goalkeeping problems is in the Nigerian Professional Football League (NPFL).

Shorunmu was appointed as the goalkeepers' trainer for the new dispensation by the Nigerian Football Federation earlier in April. Alongside former winger George Finidi, they were both appointed to join Salisu Yusuf, who will take charge of the team until a new manager is decided upon.

Shorunmu was speaking to local media when he made these claims. The former Super Eagles number 1 noted that in the past, Nigeria’s goalkeepers came from the NPFL. They were some of the best in Africa at the time as well.

Shorunmu also asked that the team's handlers pay more attention to the NPFL while calling on the home-based goalkeepers to step up in their various leagues and prove their worth on the rare occasion they get called to tryouts with the national team.

He said: “If great goalkeepers like Vincent Enyeama, Peter Rufai, Alloy Agu, Wilfred Agbonavbare and others can be discovered from the domestic scene before moving to clubs in Europe, I see no reason why such situation cannot be replicated now.

“I believe talents abound in Nigeria, all we need to do is to come together to discover the talents, expose and nurture them to quality players.

“Going overseas to get goalkeepers for the Eagles is not the best if we consider the past achievements of goalkeepers discovered in Nigeria.

“However, the home-based players can only assert their authority in the national team if they work hard and prove that they deserve to get national team invitation.”

Shorunmu also echoed the voices of many other Nigerian football legends who called for more investment in the NPFL in order to make Nigerians see the value of their home league.

Amidst reports of a move back to the Premier League, Taiwo Awoniyi has talked about how much the Union Berlin fans have helped him develop as a player.

The striker was signed by Liverpool straight from Nigeria but never featured for the Reds in six years. Several unsuccessful loan spells later, Union Berlin decided to give him another shot at a career in Europe's top flight.

His showing convinced the Iron Ones to sign him on a permanent deal and almost a season later, Awoniyi has gone on to repay the club's £6.5 million investment in him.

Awoniyi's 13 league goals are the club's highest in the league this season and are also the most goals scored by a Union Berlin player in German football's top flight. Fans of the club have coined a chant for the 24-year-old, and he has spoken on how much it means to him.

“To be honest, I think every time they do that [chant his name at matches]… I’ve been in situations where I miss chances and they still sing that song for me and right now I feel really emotional because it’s something special,” he said in an exclusive interview with local media.

“It shows how dedicated they’re as fans and like I’ve always said, the best you can do for them is to keep on doing the work, make them happy also. I really appreciate what they’re doing.”