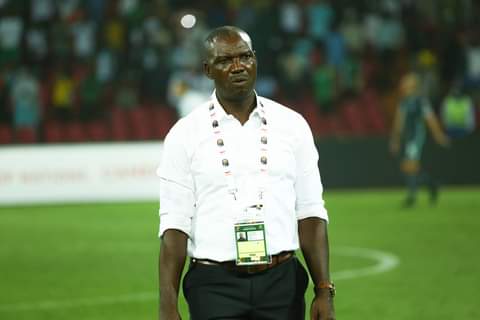 Augustine Eguavoen has highlighted one flaw in the Super Eagles that needs work.

The Super Eagles interim coach believes there will be no stopping the team once the problem is solved.

A winner is a beautiful bride, and that is the situation with the Augustine Eguavoen led Super Eagles. Not given a chance, the former Super Eagles defender has proven that he is up to the task as he has led the nation’s premier football team to the Round-of-16 at the Africa Cup of Nations with a 100% record. The only blemish was a penalty goal conceded against Sudan.

Following qualification to the next stage, an entourage of Government officials were in Garoua to encourage the Super Eagles to do more by showering dollars on the team. Among the visitors to the team were the Central Bank of Nigeria (CBN) governor Godwin Emefiele, Nigeria Football Federation (NFF) president Amaju Pinnick, Femi Otedola and Aliko Dangote. Criticisms have trailed the visit, with many suggesting it is premature and unnecessary at this stage.

Ahead of their next match Augustine Eguavoen has identified an area of the team that needs work. The Super Eagles interim manager believes once the anomaly is solved, the galaxy will be their limit.

The Super Eagles have been able to keep out opposition attackers, which includes the highly revered Mohamed Salah. The solitary goal conceded came from the penalty spot against Sudan. It bodes well for the team as they chase a fourth AFCON title.

Despite the strides the defence has made, Eguavoen insists that the team is not the finished article yet, with some areas in the team requiring work. Eguavoen repeated the same feat of 2006 where he led the team to win all its group matches but is still concerned about improving the team.

The Super Eagles interim coach has pointed out a weakness in the team that could work against them reaching their goal of winning the competition. He believes improvement in that department will improve their chances of winning AFCON considerably.

Augustine Eguavoen is far from impressed with the Super Eagles attack. He is worried about the way the team finishes off opportunities created. Against Guinea-Bissau, the Super Eagles recorded a comfortable 2-0 win, but Eguavoen believes the scoreline could have been higher if the attackers were clinical with their chances.

While the defence has been doing its job of repelling opposition attacks, the forward line has been lacking despite scoring six goals from three matches.

Against Guinea-Bissau, Eguavoen left out the attacking trio of Taiwo Awoniyi, Samuel Chukwueze and Joe Aribo from the squad, with Moses Simon coming off the bench.

The real competition starts in the next stage, with the weaklings eliminated. The Super Eagles cannot afford to be wasteful with chances and need to do better. Eguavoen told ESPN his side has no problems with creating opportunities. Finishing them is the trick.

Nigeria are the only team at AFCON to win all its group stage matches and will now play Tunisia in the Round-of-16 on Sunday, January 23.