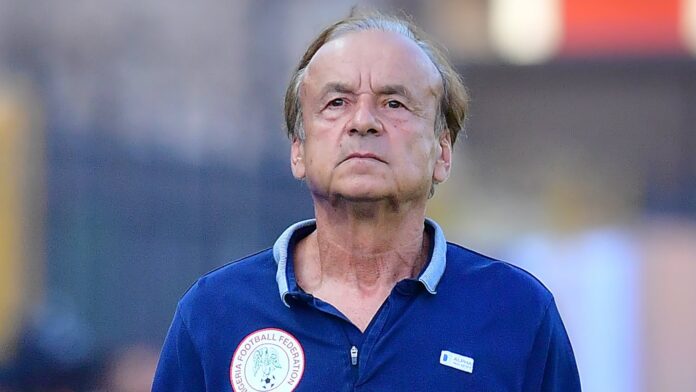 Following the draw with Cape Verde on Tuesday, Gernot Rohr has explained why his boys failed to hit the heights.

The Super Eagles managed to avoid a shock against the less fancied Cape Verde.

Is there still anybody that believes in the tactical acumen of Super Eagles German coach Gernot Rohr? Perhaps, Amaju Pinnick and his horde of journeymen. The NFF president has over the years backed the German, despite the glaring lack of tactical presence in the displays served up by the Super Eagles.

Nigerians have started to worry over the chances of the Super Eagles making it to Qatar next year despite making it to the final phase of the qualifiers. They have every reason to worry because the playoffs include the elite of African football, and as they say, there is no hiding place.

Watching the Super Eagles play, there are more groans and sighs than whoops of joy. It feels like being run through a grinder, with the referee’s final whistle bringing relief for the fans.

Gernot Rohr has given what many terms as excuses for the Super Eagles lacklustre displays.

The Super Eagles squeezed into the final phase of World Cup qualification, following a nervy 1-1 draw against the Blue Sharks of Cape Verde on Tuesday.

For Nigerians who watched the match, it was a painful experience, with the Super Eagles putting up a display that was one to forget.

Following the nervy draw, Gernot Rohr has explained why his wards served mediocre displays in the qualifiers. He attributed their performance to injury to key players.

Although the Super Eagles qualified for the playoffs after securing four points from their last two group games, it left much to be desired and many unanswered questions.

He promised an improvement before the African Cup of Nations commences in January.

According to Rohr, Wilfred Ndidi and Samuel Chukwueze were returning from injury and have not found their rhythm yet. He pleaded to give the players a little time as the team would get better.

Playing an easy group like a group of death

The World Cup qualifiers saw Nigeria pitched against African minnows Cape Verde, Liberia and the Central African Republic, with Nigeria expected to stroll through the group.

Gernot Rohr led some of the continent’s best talents through several uninspiring displays that saw the Central African Republic nick three points off the Super Eagles at the Teslim Balogun Stadium in Lagos. Lucky wins against Cape Verde and Liberia masked the massive cracks in the team and questioned the ability of the German to take this team to the promised land.

The in-game management of Rohr has brought doubts about the Super Eagles chances in the final phase of qualification.

The Super Eagles have the AFCON to fine-tune their strategies ahead of the playoffs with at least three group games against Egypt, Sudan and Guinea-Bissau from the 11th of January to the 19th.