The Nigeria Football Federation (NFF) announced the friendly between the Super Falcons and the USWNT on Wednesday, July 13, 2022.

The Super Falcons, having faced Canada just recently, will test their might against the champions of the world in September.

On Saturday, September 3, the Super Falcons take on the USWNT at the Children’s Mercy Park in Kansas City, Kansas.

The second fixture will take place on Tuesday, September 6, at the Audi Field in Washington, D. C.

Speaking ahead of the clash with the USWNT team, Vlatko Andonovski explained his expectations.

He said, “First, I’m just excited to play two matches against Nigeria. They have some very talented players who will present a lot of different problems for us to solve on both sides of the ball.

“Secondly, of course we’re looking forward to bringing the team back to one of the best soccer stadiums in the United States in Kansas City, as well as getting to play our first game at Audi Field, which I’ve visited several times for NWSL games and is also a fantastic venue for our team to play in front of our home fans.”

The USA have already qualified for the 2023 FIFA World Cup in New Zealand and Australia, while the Super Falcons are currently participating in the Women's Africa Cup of Nations (WAFCON) in Morocco with hopes of qualifying as well.

It will serve as a test match for both sides ahead of future assignments and keep them occupied in the next international window. 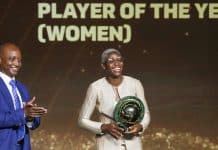