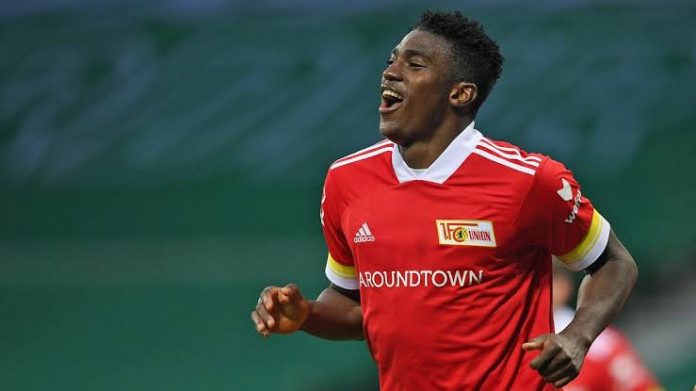 Taiwo Awoniyi is moving to Nottingham Forest after a very successful personal campaign with the Iron Ones at Union Berlin.

His journey is taking a U-turn back to an old path but this time he will be going in a new vehicle and on much smoother roads. After six years with Liverpool, his first club after leaving Nigeria, it looked like he had found a home in the German Bundesliga.

But two record-breaking and record-setting seasons later, he is on his way back to England as Union Berlin's most expensive transfer and sale. Newly-promoted Premier League club Nottingham Forest are looking for a new striker for their new challenge and Awoniyi is set to be that man.

Good move, you might say. But let us look at the facts behind the move for the under-17 World Cup winner.

Awoniyi fits the profile of the average Premier League number 9. Good in the air, a fox in the box, great at holding up play, and a good striker of the ball. Last season, he ranked third for most chances missed in the league behind top scorer Robert Lewandowski of Bayern Munich and Red Bull Leipzig's Andre Silva.

He also finished with 15 League goals despite being away for a month representing Nigeria at the 2021 African Cup of Nations in Cameroon. This placed him in place of the top scorers list in the league last season.

The Premier League is also similar to the German Bundesliga in terms of style, which is why a number of their players are targeted by clubs in England. Some of those moves fail but more often than not, they succeed.

Awoniyi will have the freedom to explore spaces behind defences, is big enough to challenge for aerial balls and to take shots at goal. He will also have his time at Liverpool to draw upon for experience even though a lot has changed in that time. But with Forest, it provides him the opportunity of another fresh start to show his stuff to the rest of the world.

Last chance to break into the Super Eagles squad

Awoniyi is also one of a number of hugely talented forwards in the Super Eagles setup at the moment. But the difference looks to be his platform.

Cyriel Dessers had to show up in Europe to make the team despite playing for a club like Feyenoord Rotterdam. But competing with those playing in the Serie A, England and Spain while playing in the Netherlands was surely going to pose a problem for him.

Awoniyi will now be in the faces of the Super Eagles handlers once again now that he is back in the Premier League. Just like Emmanuel Dennis who had to move to Watford to be seen, the 24-year-old is making the right move for his international career.

There is no better time to show what he can do than now when a new coach is in the team. The earlier he can impress Jose Peseiro, the better for him as it will solidify his footing in the team.

The jury remains out on if Nottingham Forest – who are not expected to remain in the league after next season – is the right one. But it is a move similar to the one he made to Union Berlin last year.

Both clubs have a similar profile in their leagues and if he can replicate his performances in Germany in a much more visible league, there is no stopping him from soaring with the Super Eagles.