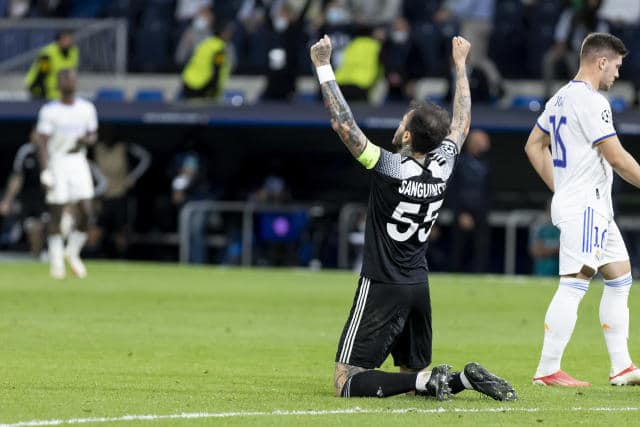 If you thought Sheriff's win against Shaktar Donetsk was a fluke, you should have a rethink by now as the Champions League newcomers have just stunned the Perennial winners of the competition at the Bernabeau.

It was the only second meeting ever between a Spanish clubside and a Moldovan team and the visitors, against all odds sealed an incredible win away from home via a Sebastien Thill volley in the dying minute of an exhilarating fixture.

The win now extends Sheriff's unbeaten run to 17 matches across all competitions.

The match kicked off in the usual expected to kick off with Real Madrid in full control of the proceedings against the surprising table-topping lightweights.

The first real threat of goal arrived with a quarter of the game having passed, from Benzema's curling free-kick effort, the result of which was a stunning save from Greek goalkeeper Georgios Athanasiadis.

Sheriff, albeit looked inexperienced on the European podium, but that didn't hold them back from stunning the record champions minutes later from Jasur Jakhshibaev's brilliant counter-attacking header to put the underdogs one up.

With the aim of inflicting further embarrassment, the goal scorer's second shot of the game grazed just wide of the right post, followed by the massive sigh of an anxious Santiago Bernabéu.

Real Madrid chased for an equalizer which didn't come even at half time despite consecutive threats from Benzema, Vinicius Jr and Nacho shortly before the break.

Having scored 110 goals in 37 UCL home games and failing to score just once in as many, Los Blancos emerged on the other side with a point to prove.

It was Eden Hazard who first had a go at defence of the Moldovans ten minutes into the second half with a well-saved finesse shot. The home team didn't have to wait for long to get their equaliser via Benzema's penalty on the hour mark.

Forcing the visitors to sit deep and adopt a counter-attacking style of play, Carlo Ancelotti's Real Madrid were boosted by substitutes Luka Modrić and Toni Kroos.

They pushed on until the final minute, only for their efforts to go in vain as Sheriff scored an excruciating unlikely winner at the death. Thill struck a superb shot on the half-volley in the 90th minute to silence the Bernabéu, and hand Real Madrid their first defeat of the season.

The 19-time champions of the Moldovan league, Sheriff Tiraspol, now sits on top of the Group D above Real Madrid, leaving Inter Milan in the third place as the race for the second round gets interesting in the group.