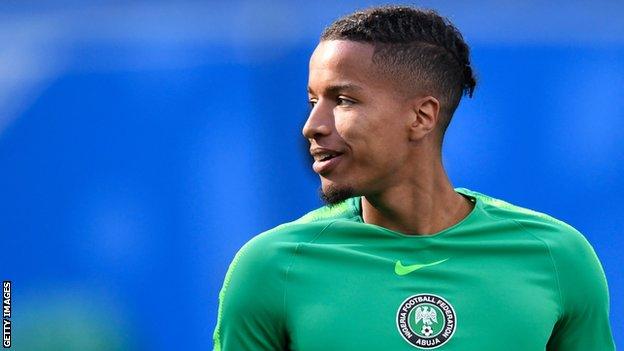 Super Eagles and Venezia defender Tyronne Ebuehi could be out of action for a long time after suffering an injury at the weekend in Venezia's 1-1 draw against Genoa  in the Serie A.

Ebuehi was making his return to the Venezia squad following his red-card and subsequ Sin thent match ban against Victor Osimhen's Napoli earlier in February. He replaced Domen Črnigoj at halftime at the Stadio Pierluigi Penzo in Venezia only to be taken off 30 minutes into his return after picking up a knock on his left knee.

The Benfica right back, on loan at the Italian club, was tested and reported to be suffering from an injury to the semitendinosus muscle of his left leg.

This will come as a blow for both Venezia, where he has fast become a key part of the squad, and the Super Eagles, who are set to face Ghana in the CAF World Cup qualifiers third round playoffs in March.

He will reportedly be out of action for the whole of March in order to recover, which will see him miss out on the Super Eagles matches against Ghana on March 25th and March 29th.

Ozornwafor was trying to prevent the opposing attacker Vanzeir from accessing a danger area in the event of a cross. Vanzeir lashed out and hit Ozornwafor on the face, knocking the defender out and earning himself a red card for violent conduct.

Ozornwafor, on loan from Turkish club Galatasaray,lost consciousness before he was substituted and taken to the hospital, where he was medically confirmed okay.

Vanzeir has been hit with a five-match suspension for his conduct and his club, Union Saint-Gilloise, has been fined €6,500 by the disciplinary committee of the Belgium football union.