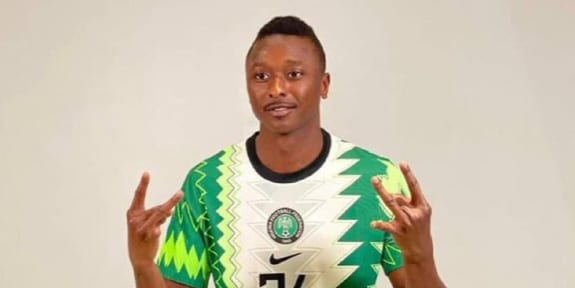 Sadiq Umar, who could not be part of the Super Eagles squad for their friendlies against Mexico and Ecuador, has cited African greats Didier Drogba and Emmanuel Adebayor as his inspiration.

The UD Almeria man has been leading the Spanish club in attack for the past three seasons and has garnered praise from teammates and opponents alike. They are on the cusp of a first LaLiga appearance since 2015 and they have his talents to thank for it.

The former AS Roma man has scored 17 goals and provided 12 assists in 35 appearances in the Segunda Division so far. His contributions are the most in attack in the league and he is a strong contender for the LaLiga Segunda Division player of the season.

The 25-year-old, following a very impressive season that has seen him linked to LaLiga clubs, has now given an interview about his season. In that interview, he cited the African greats Drogba and Adebayor, as well as Real Madrid striker Karim Benzema, as his inspirations for his gameplay.

“Growing up, I was not a striker,” he said. “But when I started playing, things changed. I started watching all the strikers. [Didier] Drogba, Emmanuel Adebayor, [Karim] Benzema.

“You can see this season it is not only about the goals I score; I have loads of assists helping the team, trying to play with the team.

“You know, that makes me feel like a good footballer.”

The 25-year-old first landed in Europe with Italian club Spezia, but it was at Roma that he began to be noticed after featuring six times for the Giallorossi, he moved to Partizan Belgrade in 2020 and the Almeria later in that year.

He has scored 40 goals and 19 assists in 80 appearances for the Spanish side and is enjoying playing for the club. However, he still has his heart set on Roma and has left the door open to a possible return.

Speaking ahead of their last match against Leganes which will determine their promotion to LaLiga, Umar said: “For now, I am playing at Almeria and I have a contract with them. And also, I’m enjoying my football in Spain but I don’t know what the future would bring.

“Rome is always home for me. Mourinho is one of the best coaches in the world and everyone knows this.”