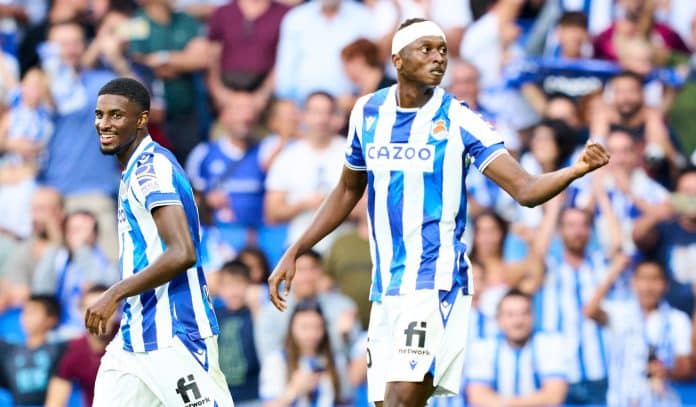 Super Eagles Striker, Umar Sadiq, has revealed that his deadline day move from Almeria to Real Sociedad was a step forward in his career.

The lanky forward has been a subject of transfer throughout the window, having been linked with moves to Borussia Dortmund, Valencia and Villarreal before joining Real Sociedad for a reported €20m from Spanish La Liga rivals Almeria in a six-year deal.

The 25-year-old was brought in to replace Alexander Isak in Sociedad’s attack after the Swedish striker left for Newcastle United for a club-record £60m fee last week.

During his formal presentation at the Reale Arena, the former AS Roma star said he joined Sociedad as it was one of the most important club in Spain.

“I chose Real Sociedad because it is one of the most important teams in Spain and it is a step forward for me,” Sadiq said.

“I am very grateful that you wanted to sign me. I am very happy. Real Sociedad was the best option, I couldn’t say no.”

Sadiq swapped Serbian side Partizan Belgrad for Almeria in 2020, scoring 41 goals in his two campaigns, which alerted clubs in England, Germany and across the Iberian Peninsula.

Super Eagles striker Sadiq Umar opened his account for Real Sociedad as they secured a 1-1 draw against Atletico Madrid on Saturday.

Real Sociedad hosted rivals Atletico Madrid at the Reale Arena, and manager Imanol Alguacil started Nigerian striker Umar on the bench, and it was not a surprise, because he just finalized his move to the club on Thursday.

Atletico started the game on the front foot, and they deservedly took the lead in the 5th minute through Alvaro Morata, who fired home from close range to make it 1-0 and it stayed that way until the break.

After seeing the direction of the game, coach Alguacil took Alexander Sorloth out for Umar. His decision later paid off in the 55th minute, as Umar jumped highest to meet a cross from Mohamed-Ali Cho and headed home from close range, beating Jan Oblak in the Atletico goal.

Umar thought he had put Real Sociedad in front in the 77th minute, but his strike was ruled out because of an offside in the build-up. No further goals came as they both settled for a share of the spoils. 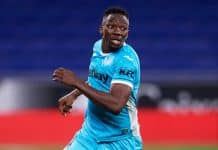