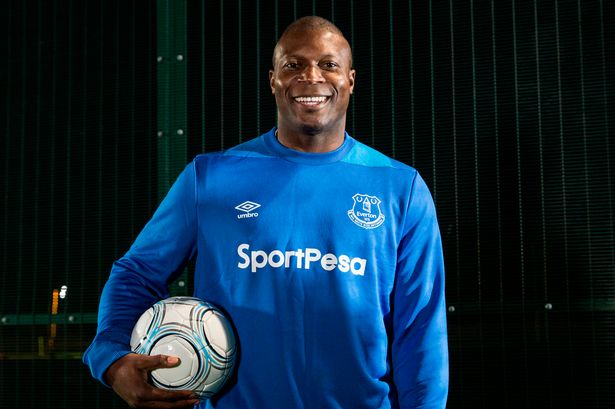 Former Everton striker Yakubu Aiyegbeni says tonight’s opponents Gor Mahia are “ready” for their Goodison Park challenge and “here to give everything, to show people and to prove themselves”.

The Blues will welcome the SportPesa Kenyan Premier League champions in a repeat of 2017’s friendly between the two sides in the Tanzanian city of Dar es Salaam, a match that saw Everton edge their hosts 2-1.

The former Nigeria international, who will be a VIP guest at Goodison, has spent time in the build-up getting to know the players of Gor Mahia, a side managed by former Leeds United and Reading defender Dylan Kerr.

The match will see an East African club side play a Premier League team in England for the very first time, and Yakubu, who scored 33 goals in 108 appearances for the Blues, says the Nairobi-based ‘K’Ogalo’ will be desperate to grasp their historic moment on the big stage.

“They’re here to give everything because it’s a dream come true for these guys. Most of these players would not usually get this opportunity to leave Africa or to play outside Africa, so they’re not here to enjoy Liverpool, they’re here to give everything, to show people and to prove themselves – to maybe get a chance to play in Europe themselves one day,” he told evertonfc.com.

Gor earned the right to play Everton by beating Simba SC Tanzania at the Afraha Stadium in June.

Yakubu believes tonight’s spectacle underlines the significance of Everton’s partnership with the gaming giants when it comes to developing football across the entire East Africa region.