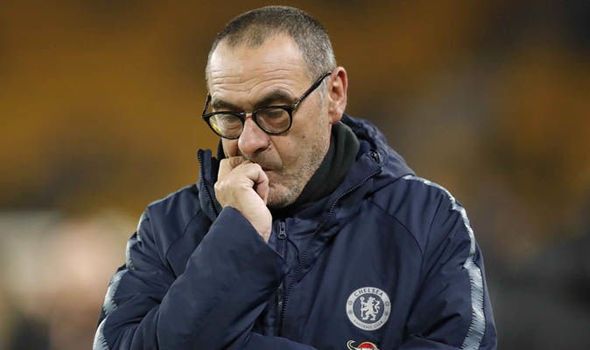 The odds are now high to get Maurizio Sarri sacked after Chelsea were hammered 6-0 by Manchester City on Sunday.

The Italian appears to have lost the dressing room at Stamford Bridge and the Blues are at risk of losing touch with the Premier League top four if they don't turn their form – their away form in particular – around.

SEE ALSO: Cristiano Ronaldo names two players he wants to join him up front next season

Odds have tumbled to as short as 4/5 on Chelsea owner Roman Abramovich making Sarri the next manager in the league to be out of a job.

An 888sport spokesman said: “Roman Abramovich is hardly known for showing patience with his managers and yesterday's humiliation at Man City could be the final straw for Maurizio Sarri. We now make him the odds-on favourite to be the next Premier League boss sacked.

Who is the favourite to replace him? According to Oddschecker.com, which compares odds from various bookmakers, Zinedine Zidane leads the field of contenders at 7/1. The former France legend has been out of a job since leading Real Madrid to three Champions League titles in a row.

Former Chelsea managers Jose Mourinho, Antonio Conte and Guus Hiddink are not massive outsiders either and owner Roman Abramovich has been known to give bosses a second shot at the job, as he did with Mourinho.

Former Chelsea star and fan favourite Gianfranco Zola is currently the second in the betting, but his previous tenures in charge at Watford and Birmingham City have not been great.

Former midfield hero Frank Lampard, who is in his first managerial role at Derby County, is 40/1 with William Hill to take charge.

Best Prices For Next Chelsea Manager (Longest Odds) According To Oddschecker