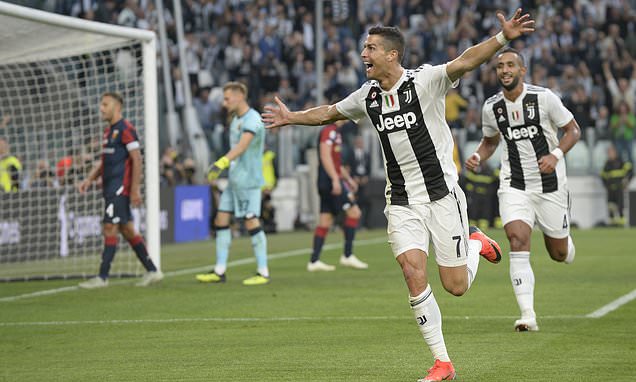 Ronaldo, who has been accused of rape in the United States, scored in the 1-1 draw against Genoa. It was his fifth Serie A goal in nine games.

Ronaldo has 311 goals in La Liga for Real Madrid, as well as 84 in the English Premier League for Man Utd.

Juve won all of its previous 10 games across Serie A and the Champions League.

Though Juventus’ lead in Italy was cut to four points after Napoli won at Udinese 3-0, coach Massimiliano Allegri believed this result would help his side for perhaps its toughest test yet, United on Tuesday in Ronaldo’s return to Old Trafford.

“We drifted out of the game after a good start to the second half and, instead of making it 2-0, we let them make it 1-1,” Allegri said.

“This isn’t good, because it’s with matches like this that titles are lost. After 10 minutes of the second half, we were already thinking about Manchester. We needed to have more focus.

“But it’s a draw that serves us well. It’ll get our feet back to earth and help us understand that to win matches, you need sacrifice and hard work.” Ronaldo had last weekend off while Juventus was idle during the international break. Normally the star of his national team, he was left off Portugal’s squad.

Less than 20 minutes in on Saturday, he scored. There was a miscommunication between Genoa goalkeeper Ionut Radu and his defender on Joao Cancelo’s cross from the left, allowing Ronaldo a simple tap-in at the far post.