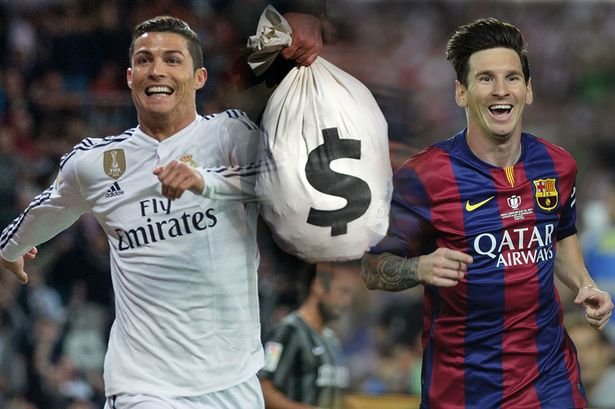 Forbes‘ annual list of the world's top-paid athletes has placed Cristiano Ronaldo as the highest-earning male footballer in the world for this year.

But despite Ronaldo agreeing to a temporary salary cut in order to help his side Juventus through this sticky spell – he remains top dog when it comes to yearly earnings.

Tennis legend and 20-time Grand Slam winner Roger Federer is No1 on the overall list for athletes – with a number of NBA stars including Steph Curry and LeBron James also taking their places high up in the standings alongside the Portuguese.

But let’s take a look at the other footballers who made the cut alongside fellow sporting royalty.

Even at 35-years-old the Portuguese remains a juggernaut on and off the pitch.

Like his old sparring partner Ronaldo, the Argentine remains in remarkable nick as he gets further into his thirties.

The PSG superstar remains the most expensive player of all time in a record likely to last a very long time – particularly given Covid-19.

Nobody comes even remotely close to the undisputed top three on this list – but Egyptian superstar Mohamed Salah is the best of the rest.

The youngest player on this list at just 21, the French whizkid appears to have the world at his feet.

At 36, Barcelona legend Andres Iniesta is happily playing out the remainder of his career in Japan… and being paid handsomely for it too.

With star player Mesut Ozil's contract running into its final few months, and Alexis Sanchez having just departed the club – Arsenal handed the German a lucrative pay rise back in February 2018.

Paul Pogba remains a marketing powerhouse, however, and is one of Adidas' most valuable assets.

Having featured on fewer TV screens around the world since the move, however, the former Chelsea star’s earnings from endorsements are comfortably the fewest of this top ten.