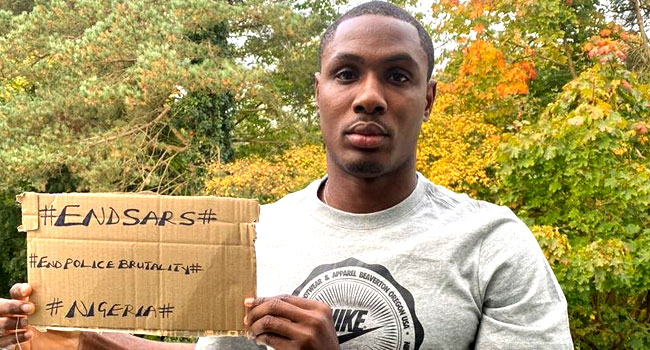 There have been widespread demonstrations across Nigeria for nearly two weeks against the Special Anti-Robbery Squad (SARS) unit of the Nigerian Police.

The unit was later disbanded but the protests have persisted with a number of the protesters killed on Tuesday night at the Lekki Toll Gate after soldiers opened fire on them.

Ighalo posted his tweet from the Parc des Princes pitch, having been an unused substitute on Tuesday night.

Ighalo said: “I'm sad and I don't know where to start from.

“I'm not the kind of guy who talks about politics – but I can't keep quiet anymore about what is going on back home in Nigeria.

“I would say [to the] government are a shame to the world – for killing your own citizens, sending military to the streets to kill [unarmed] protesters because they are protesting for their rights. It's uncalled for.

“Today, 20th of October 2020, you people will be remembered in the history as the first government to send military to the city to start killing your own citizens.

“I am ashamed of this government. I am tired of you guys. I can't take this anymore.

“I'm calling the UK government, calling all those leaders in the world to please see what is going on in Nigeria and help us – help the poor citizens.

“The government are killing their own citizens. We are calling [the world's governments], the United Nations, to see the matter.

“I want to tell my brothers and sisters back home to remain safe. Be indoors, please don't come [outside].

“Because this government are killers and they will keep killing if the world does not talk about this. God bless you all. Remain safe. One Nigeria.”

Joshua said: “The situation has escalated, the violence and killings are horrendous. All because of people saying they want to live in peace?

“I pray God opens the gates for the heroes of Nigeria! This was never a trend for me! It’s real life and I want to learn how to make lasting change.

“I’m looking at hospitals to support, along with food and care packages in the time being. Change will happen.”