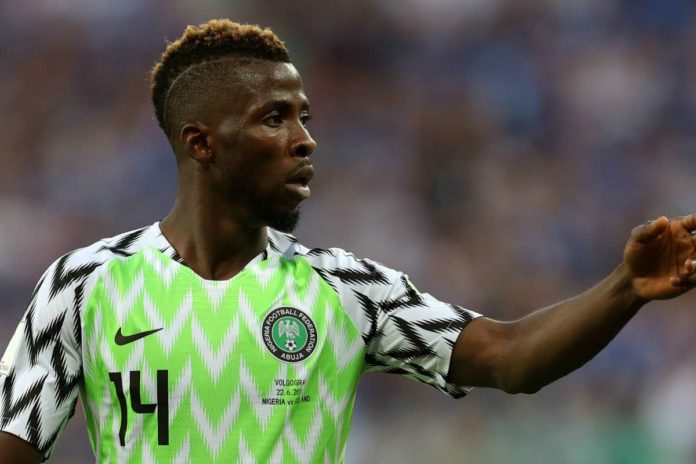 Former Manchester City forward, Kelechi Iheanacho has been impressive in recent times for his side Leicester City as he’s been scoring goals to lift his teams ambition as we have seen lately in the colours of the club.

Playing alongside English forward Jamie Vardy has not been an easy feat though he’s aided his partner’s course as a player.

But his manager’s (Brendan Rodgers) aptness to keep him on the bench remains a true case study as far as Nigeria and Leicester City is concerned at the moment.

Following his wonder goal against Millwall in midweek where the striker (Iheanacho) admittedly stated that he could have passed the ball to Zambia International forward Patson Daka, he flourished alongside prospective International teammate Ademola Lookman.

While the signing of former RB Leipzig forward Lookman could enhance the chance Iheanacho could make of, it’s relatively uncertain though as to whether the move will profit the Nigerian forward in all regards.

Iheanacho’s goal suggests a talent that is yet to be appreciated on a wider scale. Even as the decision to rush back James Maddison into the Leicester team ahead of the on-fire attacking star Iheanacho remains a puzzle presented by Leicester City and Brendan Rodgers in particular.

In all stance, Iheanacho should play alongside Vardy in the final third while Maddison could be used as a deep-lying playmaker in order to accommodate the two players in one team.

Leaving out Iheanacho on the bench with his trademark goals in transition (as per his level of contribution) could be suicidal even as the absence of his talent from the pitch is traceable to team sentiment from the Leicester point of view.

He was downplayed at Manchester City then when new boss Pep Guardiola brought in Gabriel Jesus in his stead at the club despite the impressive stats he has shown for the Citizens at the Etihad Stadium.

Missing the AFCON 2019 tournament in Egypt could be the lowest point of his football career. He was left out of the squad with inexperienced internationals like Henry Onyekuru, Samuel Chukwueze, and particularly Victor Osimhen taking his place as at then.

But his renaissance at Leicester City proves that form can be temporal but class is permanent as is the case of the left-footed Nigerian International Iheanacho.

He is too good to be given a poor rating whichever it may be as his goal in midweek (against Millwall) proves he is really dynamite at the edge of the area.

That’s the same way he got the winner with a screamer of a goal from the edge of the box against Tanzania as it gave Nigeria a 1-0 victory over the less fancied African side five years ago.

The goal ensured that Gernot Rohr began his tenure on a good note with the Super Eagles after much struggle in the initial stages of the game.

In all perspectives, Kelechi is a super talent indeed and that has earned him the name  “Senior Man” among the Nigerian (fans ) folks.

It’s just that Leicester City and manager Rodgers is undervaluing the price asset they have in the star forward called Kelechi “Promise” Iheanacho.

Is It Possible Victor Osimhen is better than Odion Ighalo?

Top five most expensive football transfers of all time Revealed

Why Chalobah, Sarr Must Learn From Win At Brentford – Tuchel

Why Solskjaer stopped Ronaldo from storming down tunnel after Leicester defeat

ABOUT US
Goalballlive.com is a leading soccer news website that provides live scores, results, videos, photos, and the latest breaking football news from Nigeria, the EPL, across Europe, and Worldwide!
FOLLOW US
CIV Media Company. © 2021. All Rights Reserved | GoalBall
GoalBall