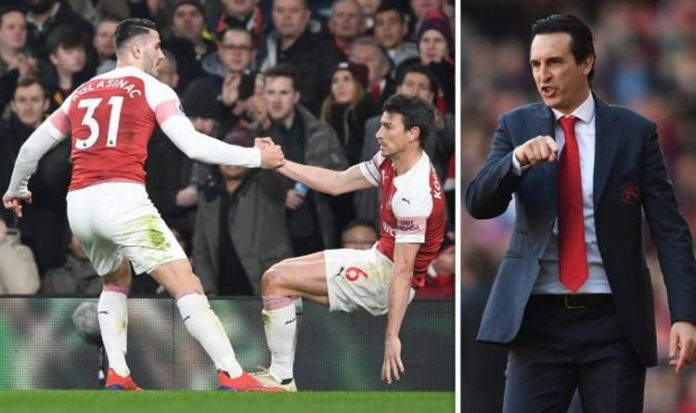 Arsenal’s defence missed Laurent Koscielny in defeat to Everton and so Unai Emery will hope that he is back sooner rather than later as the Gunners welcome Napoli to the Emirates in the Europa League later this week.

Sokratis Papastathopoulos who replaced him is the first of the latest Arsenal injury news we have as the defender picked up his tenth booking of the season which leaves the Greek international with a two-game ban.

SEE ALSO: How Liverpool will lose the Premier League title race even with 10 points clear of Man City

The 33-year-old Koscielny has been out of action since his Europa League outing in the win over Rennes in mid-March.

The Frenchman is in the same boat as Granit Xhaka, for whom the Napoli clash could also come too soon.

Emery said: “I don't know. We were waiting to see if Laurent could play today but yesterday morning we knew it wasn't possible. I want to be positive for Thursday, it depends on how he is progressing.

“Xhaka is the same. They are going to be doubts for Thursday. But we have players and can take the performance with all the players.”

Aaron Ramsey was said to be unfit to start against Everton on Sunday, but he did come off the bench, and appeared to suffer no further ill effect and should be fine for Thursday.

Konstantinos Mavropanos has appeared only once this season – in a 3-1 defeat to Manchester City.

The Greek defender played in the second half of Arsenal's friendly in Dubai against Al Nasr, however, and his tweeter handle he was quoted to have said “on the right track” afterwards.

Hector Bellerin, Rob Holding and Danny Welbeck are all still on the road to recovery from the long-term injuries they picked up earlier in the season.