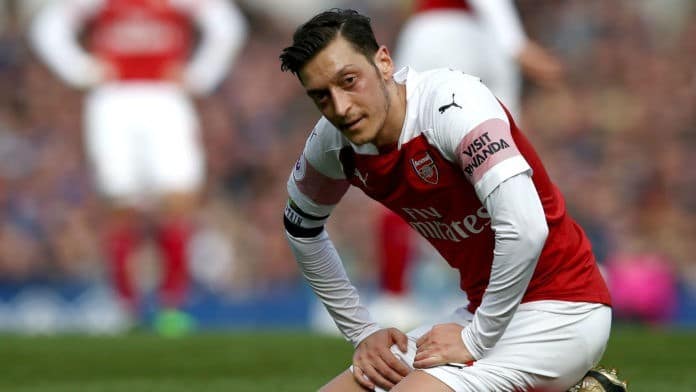 Arsenal lost 1-0 to Everton to deliver a major dent to their top four hopes – here’s how their stars rated.

Leno: Everton had ample opportunities to score but hardly ever threatened the German keeper. Little he could do with Jagielka's goal – 5.

Maitland-Niles: A thrown in which went straight out of play summed up his performance. Completely bullied by Digne and he was unable to deal with Bernard – 4.

Sokratis: Booked early on which means he will miss the next two league matches. Involved in a physical battle with Dominic Calvert-Lewin all match – 5.

Mustafi: A foremost liability in the Arsenal defence. Slow with the ball at his feet, soft in challenges and not of the standard required – 3.

Monreal: The Spaniard struggled all match with the pressing from Everton. Richarlison attacked him at will – 4.

Elneny: Brought into the team because of Granit Xhaka injury and Aaron Ramsey on the bench. But the Egyptian was woeful in midfield – 2.

Guendouzi: Another Arsenal player who was shown an early yellow card and he was a shadow of the player he has been this season – 4.

Kolasinac: Usually the big Bosnian is an effective attacking source for the Gunners but he offered nothing before being taken off at half-time – 4.

Mkhitaryan: On the fringes of the match the whole match. Some nice touches but not often producing anything useful – 5.

Ozil: His first away start of 2019 and it was easy to see why. Dropped far too deep to get the ball, couldn't handle Everton's strength and in the end, taken off with a whimper – 3.

Lacazette: Should have had a penalty in the first half. But apart from that, he did nothing of note – 4.

The Gunners face four more away league matches this season and must dramatically improve if they want to qualify for the Champions League.