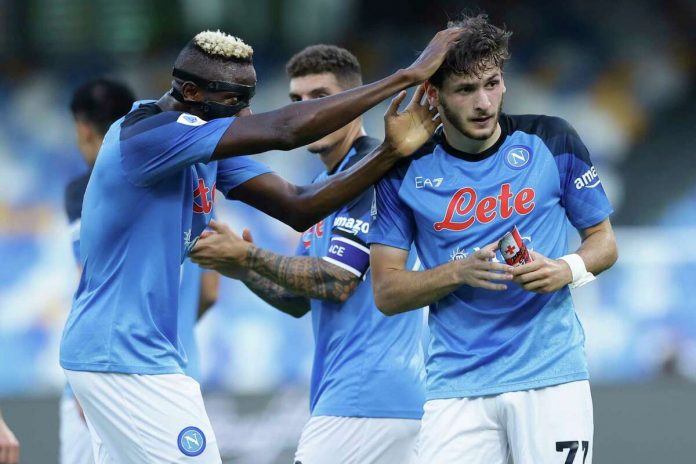 Napoli continued their perfect start to the Serie A season, thrashing newly-promoted Monza aside 4-0 demolition at the Stadio Diego Armando Maradona on Sunday.

Luciano Spalletti’s team has seen some changes in personnel this season with the exits of  defender Kalidou Koulibaly, Lorenzo Insigne and Dries Mertens.

However, Partenopei began last season with eight consecutive victories but could not sustain their Scudetto charge last season and may be on course for another fast start this season.

Super Eagles striker Victor Osimhen scored his second goal of the season against the Serie A new boys. Napoli began the season in spectacular fashion, edging Hellas Verona 5-2 away from home. In that season opener, Osimhen had a hand in two goals, scoring one and assisting another.

In their first home game of the season, Spalletti’s men were expected to win comfortably against their lowly-rated opponents and that they did in devastating fashion.

It was one of the team’s new signings Kim Min-Jae who should have opened his account early on from a corner but his header towards goal lacked the direction to land in the back of the net.

The hosts were forced to remain patient in their search for an opener, with Monza’s low block proving tough to crack.

Unable to find a way through, Kvicha Kvaratskhelia took the ball to open the scoring in spectacular fashion, with a stunning effort from the edge of the area. Nigerian forward Osimhen then doubled the lead in first-half stoppage time, just a few minutes after it looked like he would need to be substituted following a huge collision with Marlon.

The former Lille man was played in on the right by André-Frank Zambo Anguissa, displayed excellent composure before slotting home and send the hosts into the HT break with a two-goal advantage.

Monza struggled for large parts of the game and the hosts looked in cruise control after the restart, before Kvaratskhelia netted his second of the game, brilliantly beating a man before slotting into the far corner.

Following another efficient performance leading the line, Osimhen was taken off in the 84th minute, and he was replaced by Adam Ounas.

The deed was done when South Korean Kim headed home the fourth in second-half stoppage time. Napoli sit at the Serie A summit, as they look for their first league title since 1990.