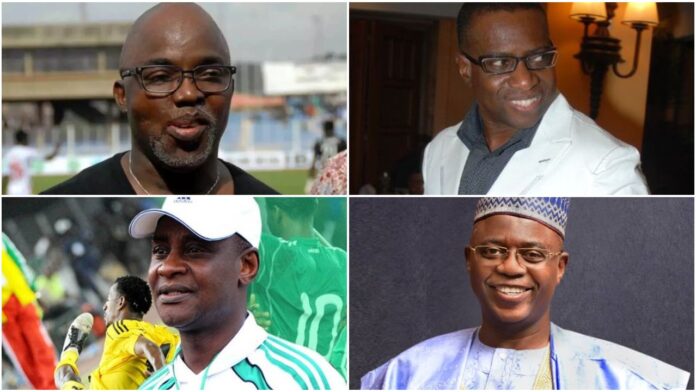 Yes, the current [Nigeria Football Federation] NFF President is Amaju Melvin Pinnick, but before him, there were about 38 others who had Chaired that prestigious soccer office in the country.

This article is not just about Pinnick so I’m not going to be dwelling on him.

You know the funny thing? There were seven foreigners who presided over the NFF as far back as the 1940s.

Wait till I reel out the list of NFF Presidents.

The lack of independence will surely be the reason for those White men being at the helm of affairs.

One name out of the White men who occupied the NFF President position that stand out for me is the late Dennis Joseph Slattery.

I trained as an altar boy under him back then in St. Dennis Catholic church. Yeah, he was a Reverend Father and an Educationist.

Ask those who attended St. Finbarr’s college at Akoka Yaba during his time. Fr. Slattery was also a football referee.

He wasn’t the only foreigner on the past NFF President list, but he is the most notable for me.

Did you know the NFF acronym used to be NFA [Nigeria Football Association]?

It was in 2008 that it was changed to NFF. And currently, that name is kind of illegal as it is yet to receive any Presidential blessing.

Many football enthusiast believe the Bill when passed into law will set Nigeria football on a path for greatness as the NFF will be able to function effectively and independent of government interference.

Yes, Article 19 of FIFA Statutes provides that “Each member shall manage its affairs independently and without undue influence from third parties.”

No wonder the Bill has met brick walls even though the intentions of the proponents might be genuine, but the contents of the Bill raise a lot of concerns – for the Nigeria government though.

Let’s now see the list of every past NFF President and, of course, the present one – which we already know.

But just so you know, I made another list of all Super Eagles coaches from inception. See it here.

Those are all the NFF President who have presided over the affairs in the Glass House.