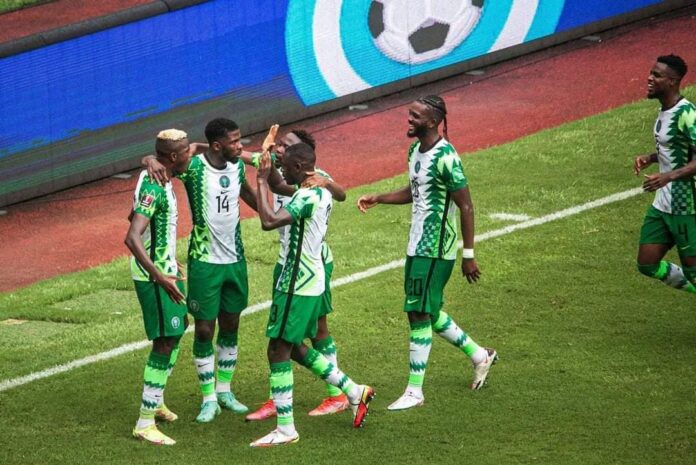 Two goals from Victor Osimhen and Ahmed Musa secured all three points for the Super Eagles.

The Super Eagles must now avoid defeat against the Blue Sharks of Cape Verde on Tuesday, November 16, to qualify for the final round of the qualifying series.

The Super Eagles of Nigeria took on the Lone Stars of Liberia in a World Cup qualifying tie. The match, which took place in Morocco, saw Gernot Rohr’s men needing a win to keep their position.

The Super Eagles saw a 2-0 victory give them all three points and saw them remain top of Group C ahead of the Blue Sharks of Cape Verde.  Although, it must be said that the quality of the match was rather underwhelming. Infact, both goals for the Super Eagles came via penalties.

The Super Eagles came into the Liberia tie with nine points. Cape Verde were two points behind. A win was imperative for the star-studded Nigerian team, but the Liberians proved to be a hard nut to crack.

With chances at a premium, Nigeria needed a penalty to break the ice. In the 14th minute, the Liberian goalkeeper Boison Wynney De Souza brought Leicester forward Kelechi Iheanacho down in the box. The referee wasted no time in awarding a deserving penalty. Victor Osimhen was on hand to dispatch the penalty with ease.

The early goal brought hopes of a barrage by the Super Eagles, but the Liberians proved stubborn. They kept the Super Eagles at bay for most of the game as the Nigerians kept searching for a second that would guarantee security.

With nothing to play for but pride, the Liberians resisted every attack thrown at them. With the game heading for a 1-0 win, coach Gernot Rohr made his second substitution. Gernot Rohr brought on Ahmed Musa to replace Kelechi Iheanacho. The change proved effective as the captain killed off the game with a late penalty. The referee awarded the Nigerian team the spot-kick after the Liberian goalkeeper hacked down Napoli star Victor Osimhen.

What the result means

With the outcome of the Liberia/Nigeria match, the group is far from decided.

Cape Verde also secured three points from their game against the Central African Republic after a hard-fought 2-1 win over their guests.

The implication of the results from matchday five in Group C means the final game of the group is of great importance to Nigeria and Cape Verde.

With two points separating Nigeria and Cape Verde, Tuesday’s tie between the Super Eagles and the Blue Sharks is now a win or bust game.

A draw is good enough to see the Super Eagles through to the final round of qualifiers, while Cape Verde needs a win.

Teslim Balogun Stadium in Lagos is the venue of the tie between both sides. Nigeria will need to be cautious to avoid the embarrassing result that put them in their current situation. The Central African Republic secured a famous 1-0 win over the more fancied Super Eagles.