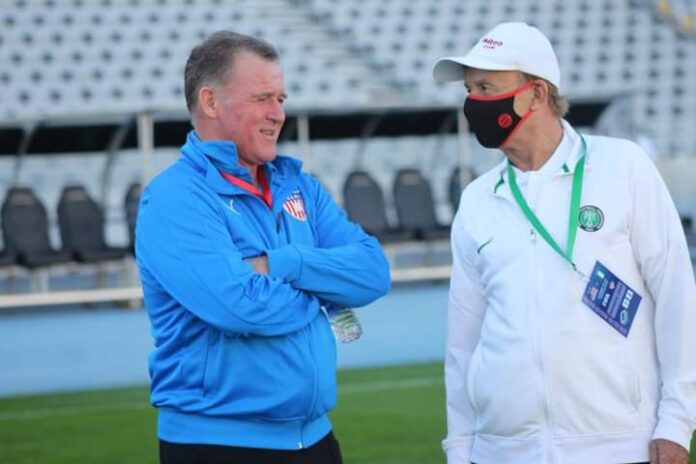 Super Eagles of Nigeria have received praise and knocks despite their 2-0 win over the Lone Star of Liberia.

The Liberian coach said the Super Eagles should be doing more with the talent available to it.

The Super Eagles of Nigeria on Saturday continued its quest for a place at the FIFA World Cup in Qatar next year. Victor Osimhen and Ahmed Musa gave Nigeria a 2-0 victory to remain at the top of the log with 12 points. The Super Eagles required two penalties to see off the spirited Liberians.

1 penalty each from Osimhen and Musa to ensure Nigeria stay top of the Group. 🦅
Qualification to the next round will go down to the last day against Cape Verde😬 pic.twitter.com/jJodRbZADr

The Nigerian team were favourites to win, considering the array of talent the team boasts. For many, it was an underwhelming victory. It was a hollow victory that did not depict a clear superiority by the Super Eagles.

More was expected from the Nigerian team, especially their performance. The head coach of the Super Eagles will take the victory as he continues to forge a team capable of ruling the continent and perhaps the world.

The Nigerian team has come in for praises and knocks by the opposition head coach Peter Butler.

The Super Eagles received knocks for their performance against the Lone Star of Liberia. However, the head coach of the Lone Star Peter Butler, thinks there is something worthy of praise in their performance. The coach had some nice words for the team as he described them as the better side and deserving of their victory.

The praise by Peter Butler might sound hollow to some, but the Liberian commended the Super Eagles in their 2-0 win over Liberia. The tie, which took place at the Grand Stade de Tangier, Morocco, was more of a result than a convincing performance.

The Liberian coach congratulated the Super Eagles for their win and claimed they deserved to progress to the next round.

The former West Ham player said the Nigerian players are good, well-drilled and well-coached. He, however, reserved some praise for his side, saying they were inferior to the Super Eagles, but they gave a good account of themselves.

Some knocks for the Super Eagles

Despite admitting that the Super Eagles were the better side, Butler couldn’t resist a subtle shot at the opposition. He called Gernot Rohr's men a team filled with millionaires that struggled to do anything of note aside from the penalties they scored.

According to Butler, he was not sure the Nigerian side had a shot on target. He credited the Nigerians with a few off-target shots.

He said the Super Eagles had players playing at the top level and earned millions of dollars annually while his players were on a hundred dollars a month.

Nigeria are ranked 36th in the FIFA rankings, but according to Butler, it didn’t make much of a difference over the Liberians ranked 114 places below them.

Nigeria next takes on Cape Verde on Tuesday at the Teslim Balogun stadium in a make-or-mar tie. The Super Eagles have to avoid defeat to progress to the next round.

Gernot Rohr and company are currently two points ahead of the Blue Sharks.