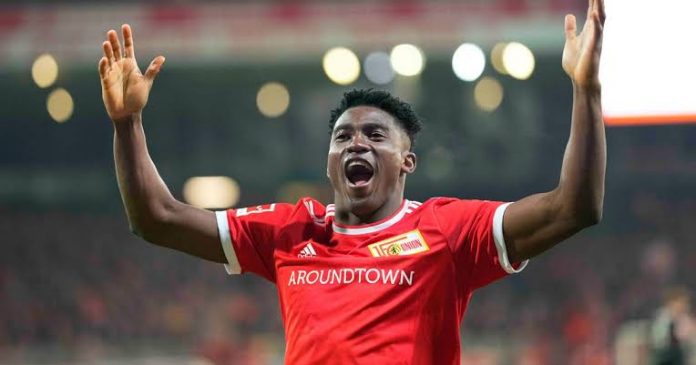 Victor Osimhen has backed his Super Eagles teammate Taiwo Awoniyi to succeed in the Premier League after he moved from Union Berlin to Nottingham Forest.

The Reds returned to the Premier League after a 23-year absence and have set their attention on strengthening their squad ahead of the upcoming 2022/23 season. They struck a deal with German Bundesliga side Union Berlin to sign Awoniyi for £17 million, breaking their transfer record and setting a record at the German club for the highest fee they have received for a player.

The move has been frowned upon by a few who believe that Awoniyi should have remained with the Iron Ones who are edging closer and closer to Europe after two seasons in the Bundesliga. They finished in fifth place on the log, thanks to Awoniyi’s 15 goals scored in the league despite his one-month absence in January when he was away with Nigeria at the African Cup of Nations.

Now, the former Liverpool man will be facing a relegation battle from the start with Forest whose aim will be to stay in the Premier League next season.

Osimhen has come out to support his former under-17 national teammate, citing his own move to Napoli as an example.

What has Osimhen said?

“I am happy for him,” Osimhen said during an interview with a local radio station. “When I moved to Napoli, people said a lot of bad things, but it was all wrong. Awoniyi will move to Premier League, and he will smash it.

“He was in the top three best players in the Bundesliga last season. He was scoring regularly at Union Berlin. Moving to Nottingham Forest shows that he believes in himself. He will still go higher, and make bigger moves.

“I believe in Awoniyi completely, and I’m happy for him. And definitely, he would prove his doubters wrong.”

Elsewhere, Villarreal have declared an interest in UD Almeria man Sadiq Umar who led the minnow side back to LaLiga after seven years.

The UEFA Champions League semi-finalists are set to go head-to-head with Ajax Amsterdam, who themselves have lost star striker Sebastian Haller to Borussia Dortmund and are seeking a capable replacement.

The Yellow Submarine are close to losing Nigerian-born Dutch winger Arnaut Danjuma to the Premier League with growing interest from West Ham United. However, Almeria's €20 million asking price for the former AS Roma striker is way above the LaLiga side's punching weight but well within what Ajax can offer for a player.

There has also been reported interest from Sevilla and Benfica but despite Almeria setting €20 million as their asking price, they will play hardball as they believe Umar is key to their hopes of surviving LaLiga next season.