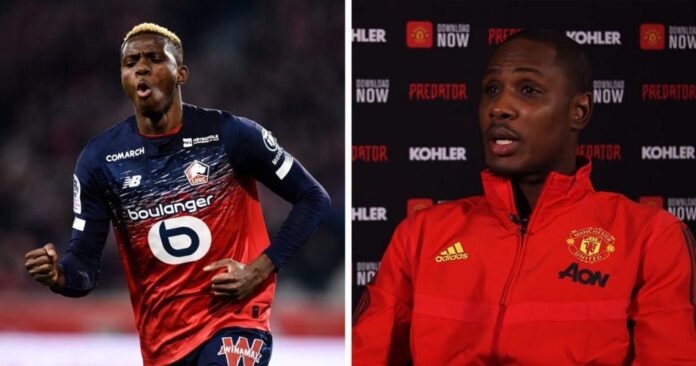 Nigeria’s pair of Victor Osimhen and Odion Ighalo has thrived on the country's football scene having become the rave of the moment following their run of form amid their exploits in Europe.

The Napoli man generated a lot of interest as regards his move to the Italian giants while Ighalo's transfer to Manchester United also made major headlines in the transfer market.

It’s given us the go-ahead for both players to be drawn into player comparison even as the latter has taken the former number 9's shirt in the Super Eagles.

And on this note, it becomes a difficult one to compare the two players with Osimhen having stated his admiration for former Nigerian striker (Number 9) Odion Ighalo.

When they were in the National Team, the Napoli man did more of watching and learning from Ighalo.

His commitment, his discipline and his mentality were a point of connection for the two wave-making stars irrespective of the calibre of players in Nigeria's Super Eagles squad as of then.

However, Osimhen’s goalscoring record has risen the radar above that of Ighalo thus proving he is a more goal-getter than the ex-Watford man.

While the two players are products of the Nigerian youth system with Ighalo captaining the Samson Siasia 2009 U-20 Flying Eagles back then, it was Osimhen’s magnificent showing at the U-17 World Cup in Chile 2015 that drew much interest.

It’s no surprise as he’s beginning to signal his aptness to end the Yekini’s goal corundum in Nigeria’s football history which Ighalo couldn’t break before his abrupt exit from the Super Eagles.

Though Ighalo’s experience has given him the edge over Osimhen in the National team especially with the latter still very much younger then, his (Osimhen) goal-scoring technique has been the best for Nigeria over the years.

Ighalo may be more comfortable on the ball with his dribbling finesse but Osimhen possesses more of a goal threat going forward in transition.

That’s how both players are wired as we look forward to more good stuff from both players in their respective football careers.