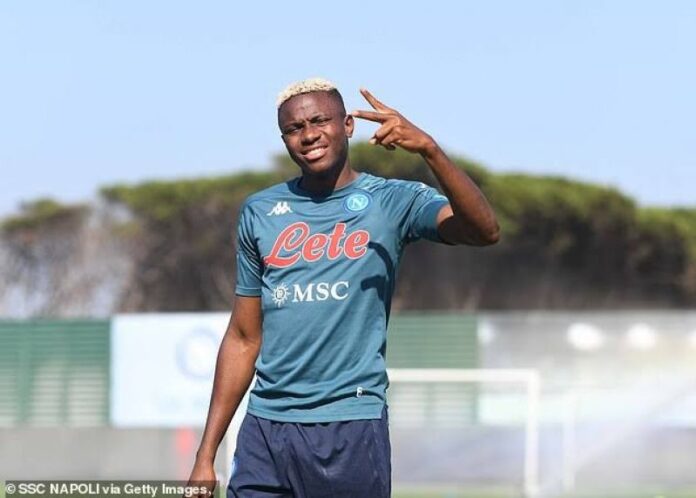 After surgery three weeks ago, Victor Osimhen is making tremendous progress in his quest to return to action.

The striker is already back in training despite a prognosis of a lengthy period on the sidelines.

Recently, Victor Osimhen picked up a cheek injury, and the belief was that the mercurial striker was out of contention for a place in the Super Eagles team to the African Cup of Nations. The prognosis of the successful surgery was that the Napoli striker would be out for at least three months.

The absence of Osimhen from the Super Eagles would be a big blow as he has contributed immensely to the team to the quest to land the African Cup of Nations and qualify for the FIFA World Cup in Qatar next year.

The injury incident occurred last month against Inter Milan and has generated a lot of heat, with clarity on his return date unclear. Nigerians have already started debating possible replacements, with several names suggested.

Names like Taiwo Awoniyi and Emmanuel Dennis are top of the list to take Osimhen’s place at the tournament starting January 9.

With nine goals to his name this season, Taiwo Awoniyi has been in tremendous form with Union Berlin. Union Berlin is currently sixth on the Bundesliga log.

Emmanuel Dennis has also been posting fantastic performances with Watford this season. The Kwara Football Academy product has been instrumental to Watford and their fight for survival.

While the debate rages over Osimhen replacement, reports suggest that the Napoli striker may still make it to AFCON.

Following the injury picked up by Osimhen in a head collision with Milan Skriniar last month, Osimhen was to be out of commission for a lengthy period. The prognosis was dire and made nonsense of any hope of the striker being a part of the Super Eagles to Cameroon in January.

The player’s recovery is progressing better than expected, with the player already back on the pitch ahead of schedule. Victor Osimhen has been on the sidelines since the November 21 incident. The incident left him with a left cheekbone and orbital fracture.

Osimhen has started training but is yet to resume full-contact training. It will suggest his readiness to return fully to the pitch.

Big boost for Napoli and Nigeria

Napoli is challenging for the Scudetto, while Nigeria wants to win its fourth AFCON title. The injury to Osimhen was a considerable setback for his team as he is a vital component of their progress.

Expected to be sidelined for three months, Osimhen is making a quick recovery from the surgery. Three weeks after the surgery, the Nigerian international is in training. Napoli posted a couple of videos of the striker going through his paces.

It comes as a big boost for the Super Eagles, with the African Cup of Nations just around the corner. Gernot Rohr will be pleased with the progress Osimhen has made and hopes Nigeria’s top scorer in the qualifiers will be available for the Super Eagles opening tie at the AFCON.

The tournament kicks off on January 9, with Nigeria locking horns with the Pharaohs of Egypt on January 11.