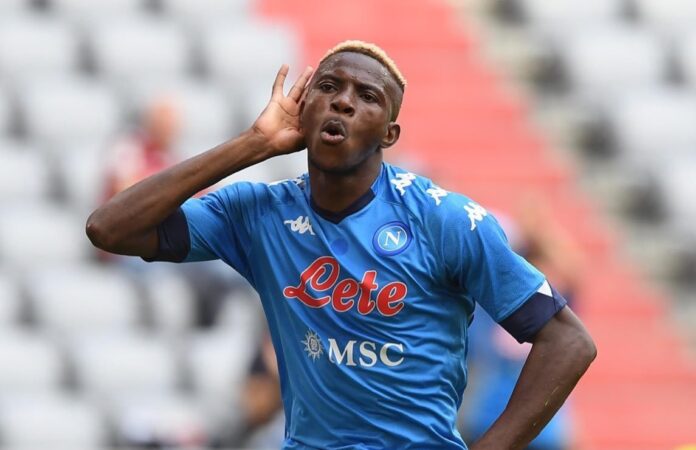 Napoli legend Salvatore Bagni stated the obvious in a recent interview where he claimed Victor Osimhen is being monitored by top clubs.

There have been rumours, reports and speculations linking the 23-year-old former RSC Charleroi forward with a move away from the Diego Maradona stadium at the end of the season, despite his contract at Napoli having three more years to go.

Arsenal have, most recently, been reported to have contacted Osimhen who, through his agents, told the Gunners that while he is flattered, Napoli remains his focus for the foreseeable future. The striker has also been linked to Liverpool and even Newcastle United, but there is currently nothing to these reports.

However, Bagni has now claimed that he has it on good authority that Osimhen is being monitored by “the most important teams in Europe”. Bagni said to Italian outfit Tele A: “I have received important news about the centre forward.

“They told me that all the most important teams in Europe, the ones that aim to win, are interested in the Nigerian. Is there a reason or not?”

Bagni’s question at the end of the quoted statement could raise some concerns as Osimhen has been unable to pull his weight against the big teams – or teams on Napoli’s level – that he has played against so far.

The big forward became the most expensive African when the club signed him from LOSC Lille in 2020 for €70 million and has produced very decent returns alongside incredible plays that stand him out as a legitimate threat for defenders.

However, his goal record against Serie A’s big sides is dismal, managing to score only against Lazio and Atalanta while firing blanks against AC Milan, Juventus, AS Roma, Inter Milan and Fiorentina in 46 total appearances in the Italian top flight.

Osimhen is not the only Super Eagle under surveillance from clubs in the big leagues, however.

Joe Aribo of Glasgow Rangers in the Scottish Premiership is attracting interest from the Premier League and is also reported to prefer a move away from Ibrox when his contract is up amidst all the links.

His former manager, Steven Gerrard, is keen on bringing him to Aston Villa, as is Patrick Vieira of Crystal Palace. Recently, former Leeds United striker Noel Whelan who now works in football media has also insisted that Rangers will find it very difficult to retain the services of Aribo in the summer.

Aribo is having his best season in terms of goal involvement, scoring eight goals and providing ten assists in all competitions for the club this season.

Whelan believes that Rangers will try to cash in on Aribo in the summer as they have hit a roadblock in trying to get him to sign an extension. This plan will be helped if they can win the UEFA Europa League or secure a spot in the UEFA Champions League next season.

“Getting that guaranteed European football puts them in a stronger negotiating position,” Whelan told Football Insider. “But I just think, whether it’s Rangers or Celtic – when Premier League clubs come calling, it’s always difficult to turn them down.

“The money they can offer Rangers would be astronomical, and then there are the wages they can offer the player as well. It would probably set them up for the next two years.

“They’re going to find it very difficult to keep hold of Aribo. He’s probably got aspirations of playing in England – and as a player, that is where you want to be.”