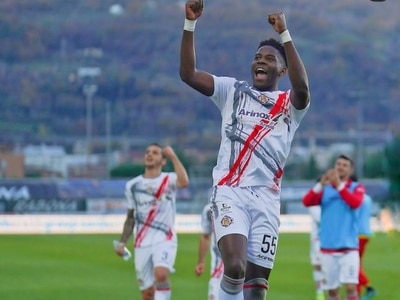 Atalanta captain Rafael Toloi has disclosed that Nigerian defender Memeh Caleb Okoli is set to become a key player for the Bergamo side in the Serie A this season.

The Brazilian-born Italy international is convinced the Nigerian descent’s development is at an advanced stage and good enough to make an impact in the first team this term.

Okoli, who has been with the Atalanta youth academy since 2016, signed his first professional contract with the Goddess in 2020. But the Italy youth international spent last season on loan at Cremonese, and made 32 appearances in the Serie B and contributed one assist, helping the Grey and Reds secure promotion to Serie A.

Based on his performances away from his parent club has forced manager Gian Piero Gasperini to keep the 21-year-old back with the team rather than sending him on another loan this summer.

The Super Eagles-eligible youngster stood out in Atalanta’s few outstanding stars during the friendly defeats to Newcastle (1-0, July 29) and Valencia (2-1, August 6). He is in line to make his Serie A debut this weekend when Atalanta make the trip to Sampdoria on Saturday.

And Atalanta captain Rafael Toloi believes the young defender has shown remarkable abilities to merit a place in the first team.

“He is very strong physically,” Toloi, 31, said in an interview with L’Eco di Bergamo, as per Tutto Atalanta.

“He has grown a lot and I find him ready and in the matches against Valencia and Newcastle he has shown that he can be there.”

Okoli is not the only Nigerian at Atalanta this season because he has been joined by Super Eagles attacker Ademola Lookman.

Lookman, after an excellent year at Leicester City, joined the Italian Goddess from RB Leipzig on a four-year contract for a reported fee of €15 million.

The 24-year-old forward and Okoli will hope to lead Atalanta to do better than their 8th-placed finish from the 2021/22 season, narrowly missing out on the European spots.