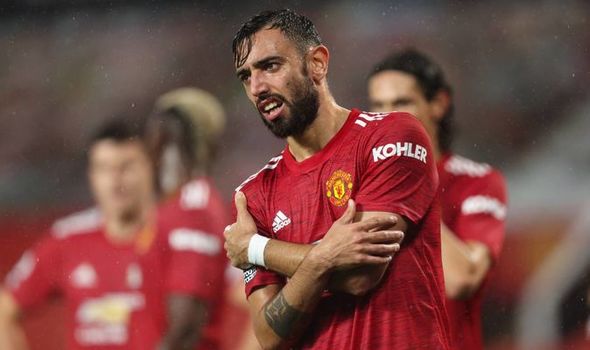 Bruno Fernandes scored twice and assisted once during Manchester United's victory against Everton but Ole Gunnar Solskjaer claims he was “frustrated” by the midfielder's positioning.

Capping an already impressive display, Fernandes then provided the assist for Edinson Cavani's added-time strike to claim involvement in all three of United's goals.

Despite Fernandes' man-of-the-match showing, Solskjaer admitted there was one area the Portugual star could have improved on as he praised the player after the match.

“Sometimes that frustrates me, because sometimes there’s passes being played where he should have been and he’s not there.

“But you know when you’ve got someone who drives them on like this, of course you’re very happy.”

Meanwhile, United captain Harry Maguire heaped praise on Fernandes and highlighted how the 26-year-old bounced back from his sub-par performance in the midweek defeat to Istanbul Basaksehir.

“Bruno was excellent today,” Maguire said. “He does his talking on the pitch and I’m delighted that he’s got a couple of goals – or whatever you want to call it, a goal and an assist. But he was brilliant out there and helped us get the victory.”

October 2, 2022
November 8, 2020
Home EPL Solskjaer Reveals How He Was Frustrated By Fernandes’ Position In Everton Win