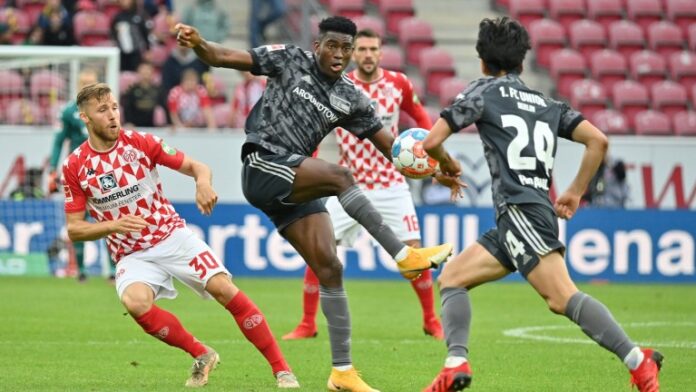 Two second-half goals from the Nigerian international secured an emphatic comeback win against his former employers, Mainz in one of the German Bundesliga matches on Sunday.

Following their 3-1 victory over Maccabi Haifa on Thursday, The Iron Ones travelled to MEWA Arena, hoping to extend their winning streak in all competitions, while the hosts aspired to return to winning ways following a 1-0 away defeat at Bayer Leverkusen.

Everything in the match revolved around the former Liverpool player as he was able to miss a couple of chances earlier on in the keenly contested first half.

The misses from Awoniyi seemed costly as Marcus Ingvartsen swept a smart first-time finish beyond Andreas Luthe to give Mainz the half-time lead against his parent club.

The hosts could've doubled their advantage but for Luthe who made a crucial save from Onisiwo's effort, the two teams went into the halftime break with a one-goal separating them.

And there came the second half, Union Berlin came with greater intent and style about their game and it didn't take long for Awoniyi to get the equalizer in the sixty-ninth minute – his first goal in five matches.

Awoniyi finished with aplomb from inside the area after barrelling past David Nemeth, That goal was his fifth in the 2021-22 German top-flight season as well as Union Berlin’s 100th goal in the top-flight.

The 24-year old who spent last season on loan at Mainz would bag the second four minutes after netting Union Berlin's equaliser.

Eight minutes from full-time, man-of-the-match Awoniyi was substituted for German striker Andreas Voglsammer, with his compatriots Anthony Ujah and Suleiman Abdullahi not listed for action.

This is a kind of performance that has generated calls for Awoniyi to be included in Gernot Rohr's list for the upcoming World Cup Qualifiers later this month.