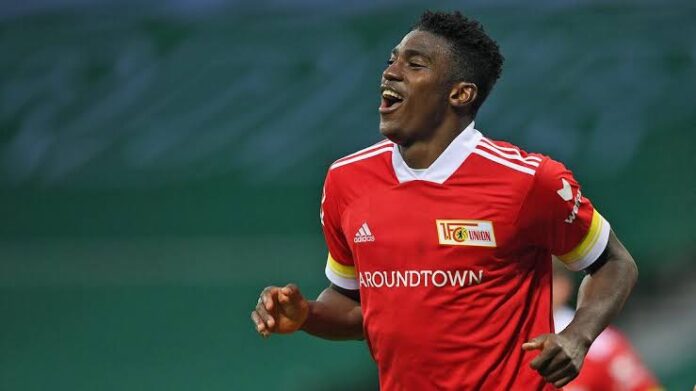 Taiwo Awoniyi is fighting for a place in the Super Eagles as they head for the AFCON in Cameroon next year.

The prolific striker has dropped down the pecking order of Gernot Rohr’s team.

The CAF FIFA World Cup qualifiers have entered their final stage as the ten teams for the playoffs have emerged. The list is the creme-de-la-creme of African football. Teams like Algeria, Egypt, Cameroon, Ghana and Nigeria headlines the list, with heavyweight clashes expected.

Before the playoffs, which comes up in March 2022, there is the small matter of the African Cup of Nations that will take place in January, with Cameroon as hosts.

In Nigeria, there has been a clamour for the sack of the national team coach Gernot Rohr following the dismal displays by the Super Eagles in the qualifiers. Fearing an embarrassment at the African Cup of Nations and the playoffs, many believe the German should go as his criteria for inviting players to the team is not understood.

Taiwo Awoniyi is a player that has been on fire for his club Union Berlin and has merited opportunities in the national side. With AFCON approaching, Awoniyi will be a solid addition to the squad over Odion Ighalo.

With the AFCON coming up in January next year, many European clubs are bracing up to lose several players to the competition. It is one situation that has militated against African players getting signed by top clubs in Europe. One manager who is not bothered about losing a player to the tournament is Urs Fischer.

The Union Berlin manager is unperturbed about losing one of his most effective strikers when the Bundesliga will be in the thick of the action. Fisher confessed that he would be delighted if Awoniyi made the trip to Cameroon.

Should Awoniyi make the trip to Cameroon, he would miss four Bundesliga matches. He will miss the game against fourth-placed Bayer Leverkusen. He will also be absent for the ties against Augsburg, Borussia Monchengladbach and Hoffenheim alongside the DFB Cup tie against Hertha Berlin.

It’s a star cast of strikers currently in the Super Eagles, and Gernot Rohr has a tough job selecting who makes the party to Cameroon.

Awoniyi is in imperious form in the Bundesliga but has fallen down the list of preferred strikers. The return of Odion Ighalo has pushed him down the pecking order as he battles to pick a seat to Cameroon with competition from Victor Osimhen (Napoli), Kelechi Iheanacho (Leicester City), Paul Onuachu (Genk) and Terem Moffi (FC Lorient).

The chances of Awoniyi making the team for AFCON is brightened by the Confederation of African Football (CAF), permitting up to 28 players in its squad.

Awoniyi is tied on third in the Bundesliga goalscorer charts with Patrick Schick (Bayer Leverkusen) and Modeste (Koln) on 8 goals.

Only Robert Lewandowski and Erling Haaland have scored more Bundesliga goals this season than Taiwo Awoniyi:

The Nigerian forward has only been outscored by Robert Lewandowski (Bayern Munich, 14 goals) and Erling Haaland (Borussia Dortmund, 9 goals).