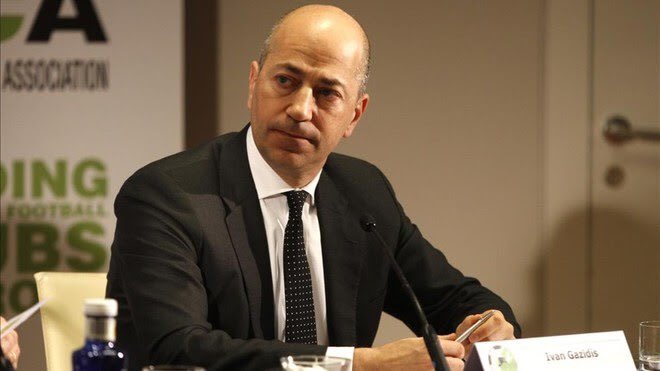 Arsenal’s chief executive Ivan Gazidis has left his role at the North London side to join Italian side AC Milan as CEO.

Speculation of 54-year-old Gazidis' departure have been doing the rounds for a while recently and the move has now been confirmed.

Gazidis spent his time as chief executive of the North London outfit since January 2009 and even oversaw the appointment of Arsenal's new manager Unai Emery.

In a statement, the former chief executive said, “For the last ten years I have been privileged to dedicate myself to this great club.”

“Although it is very hard to do – the hardest decision of my life – I believe that it is the right time for me to step aside to allow new leadership, energy, and ideas to take the club forward into this exciting new era.”

“I believe in the positive force of change, both for me and for the club. I am excited to see what the future holds for this great club and I am energized by a new personal challenge with AC Milan.”

“My sincere thanks go to Stan and Josh Kroenke for their support and guidance on everything we have done. To Sir Chips Keswick, Lord Phil Harris, Ken Friar and my wonderful management team and staff, on and off the field, to Arsène Wenger, Unai Emery and to the fans of this giant and incredible club, thank you for your immense support and friendship over so many years and for the wonderful privilege of being part of the journey.”

“We lived through many emotions together, the highs and the lows of football, and I am proud to be able to say that I gave this club and its fantastic people everything that I had in me. I am excited and energized for the future for myself and for Arsenal Football Club and I will always hold it in my heart.”

“Arsenal is entering a new chapter and I have done everything I can to ensure that it is strongly placed to take on that challenge. This includes world-class facilities and outstanding leaders in every sector who carry the values of the club, including, of course, Unai Emery, Raul Sanllehi and Vinai Venkatesham in whom I have enormous faith.”

“We have been building on the club’s progressive social values, leading the way on the women’s game, diversity, and inclusion, and establishing the Arsenal Foundation. This will remain central to the club’s philosophy. ”

Twitter has since exploded with reactions to the news of Ivan Gazidis exit:

So it's official then, Ivan Gazidis is leaving. Will be interesting to see where AC Milan and Arsenal end up in the long term future.

Ivan Gazidis leaving, it might be a blessing in disguise or a ticking time bomb waiting to explode. Two key Arsenal figures of the barren era have left. Arsene and Ivan.

You know there’s trouble in AC Milan when Ivan Gazidis heads that direction.

Moving onto a better, bigger & growing club rather than staying at a dying club. What a move.

What if Arsene Wenger is brought in to replace Ivan Gazidis?

Glory days are ahead ✋?.

Best news ever for Arsenal fans. Since he took over as CEO in 2008, we stopped being competitive on and off the pitch (2007-2008 being our last real title challenge). Not a coincidence. Good riddance, con artist.

Wenger gone, Ivan Gazidis gone, all left now is for Kroenke to go away and we can MAKE ARSENAL GREAT AGAIN

Ivan Gazidis decides to leave and Arsenal fans don't know how to act ?

As previously discussed, Josh Kroenke is and most likely will be the instant candidate to replace Ivan Gazidis in the CEO role. For those who're unsure, Josh is a younger, hungrier, more competent Gazidis.

Ivan Gazidis did a great job building the stadium and the facilities but where are the trophies! Selling our best players especially RVP to rivals will never evaporate from my mind. Anyway good luck at AC Milan. Raul and Vinai kindly bring trophies.